What does Enzo mean?

[ 2 syll. en-zo, enz-o ] The baby boy name Enzo is pronounced as EHNZow †. Enzo is an Italian and English name of Germanic and Latin origin. Germanic origin, Italian use: The origin of the name is debated; it could be from a byname of the Germanic element 'ent', or it could have first been an Italianized version of Heinz, or else it could have evolved as a diminutive of names ending in '-enzo'.

In addition, Enzo is a variant of the name Henry (English) in the English and Italian languages.

Enzo is also a variant of the name Vincent (Dutch, English, French, and Scandinavian) in the Italian language.

The name Enza (Italian) is the female form of Enzo.

Variant forms share both the origin and meaning of Enzo.

Enzo is popular as a baby name for boys, and it is also considered trendy. The name's popularity has been increasing since the 2000s; before that, it was of infrequent use only. At the modest height of its usage in 2018, 0.085% of baby boys were given the name Enzo. It ranked at #228 then. Within the group of boy names directly linked to Enzo, Henry was the most regularly used in 2018. It was used 6 times more than Enzo in that year. 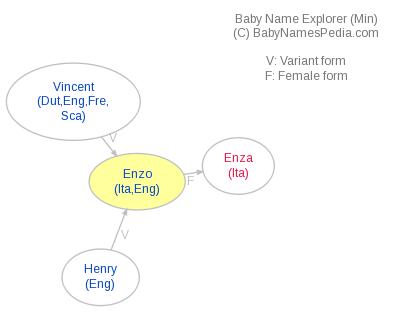