What does Erin mean?

[ 2 syll. e-rin, er-in ] The baby boy name Erin is also used as a girl name, with the latter form being much more common. Its pronunciation is EH-RihN or EH-R-ahN †. Erin is used chiefly in the English language, and its origin is Hebrew and Celtic. From Celtic roots, its meaning is Irish man. It is derived from the element 'Éire' meaning Ireland. It represents the transferred use of the geographic name as a given name. See Erin for more information.

In addition, Erin is a variant of the name Aaron (English, German, Hebrew, and Polish) in the English language.

Erin is a rare baby name for boys. At the modest peak of its usage in 1974, 0.020% of baby boys were given the name Erin. It ranked at #441 then. The baby name has since steeply fallen in popularity, and is today of irregular use. In 2018, out of the group of boy names directly linked to Erin, Aaron was the most commonly used. In the past century Erin has mostly been a girl name. In 1996, the name Erin was given to 46 times as many girls than boys. 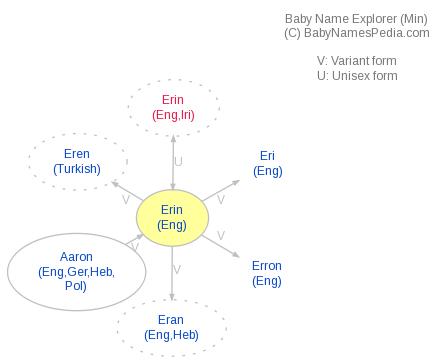