What does Eros mean?

[ 2 syll. e-ros, er-os ] The baby boy name Eros is pronounced EHR-aoS in English †. Eros' language of origin is Old Greek and it is used largely in the Italian language. It is derived literally from the word eros which means 'sexual love, desire'. The name was borne in Greek mythology by the primordial winged god of lust and love, who was also worshipped as a fertility deity. He was the young son of Aphrodite and was often armed with arrows which can strike fiery passion in the victims' hearts. He was also known as Amor ('love'), and his Roman equivalent was Cupid ('desire').

Variants of Eros include Eroce and Erose.

Eros is unusual as a baby name for boys. It is listed outside of the top 1000 names. 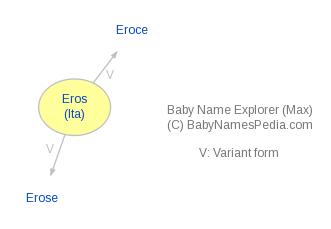