What does Erwin mean?

[ 2 syll. e-rwi(n), er-w-in ] The baby boy name Erwin is pronounced in Dutch as EHR-VihN or EHR-WihN or in German as EHR-ViyN †. Erwin is mainly used in the Czech, Dutch, English, and German languages, and its language of origin is Germanic, Celtic, and Old English. From Germanic roots, its meaning is boar friend, honored friend, warrior friend. An original form of Erwin is Herwin (Germanic). The name is of debated origin. It could be from the first element 'eber', 'era' (meaning honor, respect), or 'heri' (army, warrior), and the second element 'wine'. The first name was rather popular among medieval German speakers, especially those living in the Rhine region, borne for example by Erwin von Steinbach (1244-1318) the founder of the Strasbourg Cathedral. In the USA, it is sometimes taken as a form of Irving or Irwin.

Erwin is also a variant spelling of the English name Irwin.

Erwin is an unusual baby name for boys. Its usage peaked modestly in 1901 with 0.054% of baby boys being given the name Erwin. Its ranking then was #216. The baby name has since experienced a steep fall in popularity, and is today used on an infrequent scale. Among all boy names in its group, Erwin was nonetheless the most commonly used in 2018. 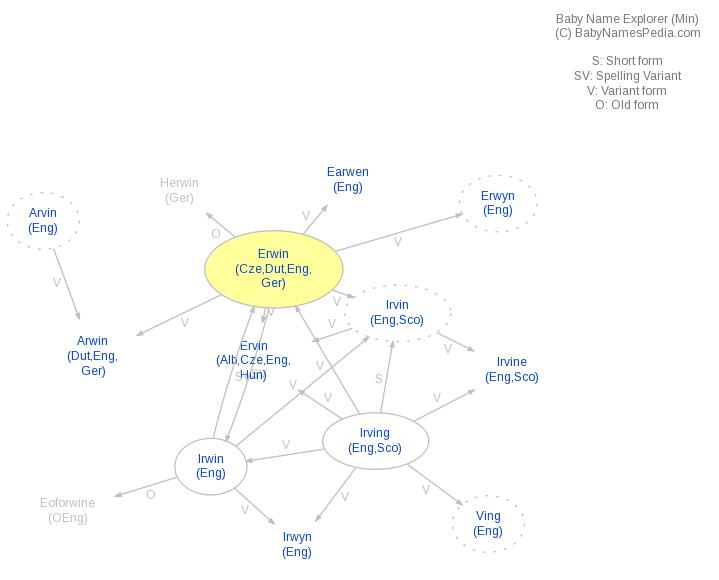