What does Esmond mean?

[ 2 syll. e-smon(d), es-mo-nd ] The baby boy name Esmond is pronounced as EHZMahND †. Esmond's language of origin is Celtic and Old English. It is predominantly used in the French and English languages. From Old English roots, its meaning is 'favored protector' - in this context, Esmond can be used in the English and French languages. It is derived from est meaning 'favor, grace' ; mund 'protection, protector'. An original form of Esmond is Estmund (Old English). The name was first used in the Middle Ages. It died in use by the 14th century before seeing a revival in the late 19th century among English speakers. In literature, it has appeared in William Makepeace Thackeray's novel The History of Henry Esmond (1852).

In addition, Esmond is a derivative of the English and Irish Desmond.

Esmond is also a derivative (French) of the English, German, and Polish Edmund.

Esmond is an irregularly used baby boy name. It is not ranked within the top 1000. In 2018, among the family of boy names directly linked to Esmond, Desmond was the most commonly used. 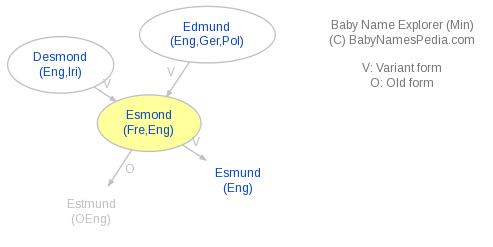