What does Estelle mean?

[ 2 syll. es-tel-le, est-e-lle ] The baby girl name Estelle is pronounced as eh-STAHL †. Estelle is primarily used in French and English, and its language of origin is Old Persian and Latin.

Estelle is a French form of the Dutch, English, French, German, Hebrew, and Spanish name Esther.

Estelle is also an English and French form of the English, German, and Italian name Stella.

A form of the name is the English spelling variant Estell.

Estelle is a classic favorite. Currently it is still somewhat popular as a baby name for girls, though it was in more widespread use previously. At the modest height of its usage in 1911, 0.195% of baby girls were named Estelle. It ranked at #106 then. The baby name has since dropped out of favor, and is of sporadic use in recent times. In 2018, its usage was only 0.017% and its ranking #836. Within the group of girl names directly related to Estelle, Stella was the most popular. In 2018, it was used 16 times more than Estelle.

Baby names that sound like Estelle include Esdelle, Eshtaole, and Estella (English, German, and Spanish). 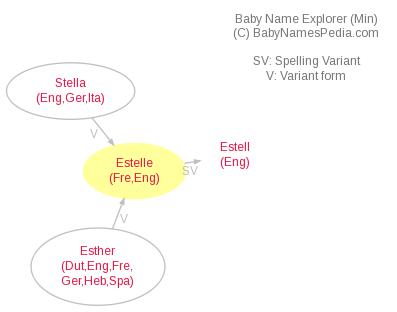