What does Ethan mean?

[ 2 syll. et-han, eth-an ] The baby boy name Ethan is pronounced in English as IY-THahN †. Ethan's language of origin is Hebrew, and it is predominantly used in English and Hebrew. Ethan is of the meaning 'enduring, long-lived'. It is a biblical name derived literally from the word ethan with the meaning 'enduring'. An original form of the name is Eythan (Hebrew). The name was borne in the Bible by four minor characters, most notably Ethan the Ezrahite, who was described as a man whom only King Solomon surpassed in wisdom. The name was adopted modestly by English Puritans in the 17th century. Its popularity in the USA received a boost from the fame of Ethan Allen (1738-1789) the American revolutionary and hero. It has also seen a revival as a modern Hebrew first name and surname. In literature, the name has been borne by the central character in Edith Wharton's novel Ethan Frome (1911).

Ethan is a very popular baby name for boys. The name grew in popularity from the 1950s up to the 2000s. Its usage peaked in 2002 with 1.071% of baby boys being named Ethan. Its ranking then was #5. The baby name has since experienced a decline in popularity. In 2018, it ranked at #12 with a usage of 0.615%, but it was nevertheless the most regularly used among all boy names in its group. 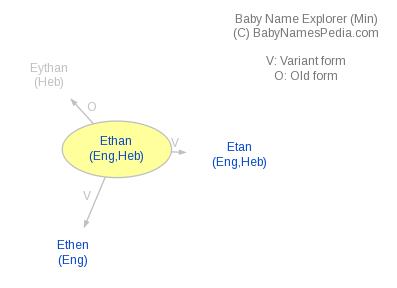