What does Etta mean?

[ 2 syll. et-ta, ett-a ] The baby girl name Etta is pronounced as EHTTaa- †. Etta is largely used in the English and Scottish languages, and its origin is Germanic. The first name developed as a short form of names with the Italian feminine diminutive suffix '-etta', which is itself derived from the French '-ette'. In the latter case the form Ettie is a more common diminutive. Etta is also used as a diminutive of Marietta or Maretta, which are Anglicized forms of Mairead in Gaelic Scotland.

In addition, Etta is an English contraction of the name Henrietta (English and German).

Etta is also a Scottish variant transcription of the name Mairead (English, Gaelic, and Scottish).

Variant forms inherit the origin and thus the meaning of Etta.

Etta is a classic favorite. Currently it is still somewhat popular as a baby name for girls, though to a lesser extent than it was before. In 1900, 0.159% of baby girls were given the name Etta. It ranked at #123 then. The baby name has since markedly declined in popularity, and is of irregular use in recent years. In 2018, its usage was only 0.015% and its ranking #951, but it was nonetheless the most popular out of all girl names in its group. 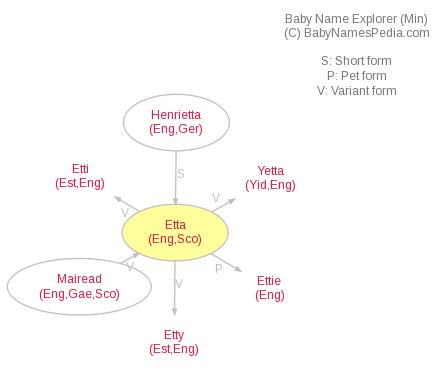