What does Eugene mean?

[ 2 syll. eu-ge-ne, eug-ene ] The baby boy name Eugene is pronounced as YuwJHIY-N or -uwZ-EHN †. Eugene is an English and French name of Old Greek origin. It is derived from the elements 'eugenes' meaning well born, noble ; 'eu' good, well ; 'genos' birth, descent. Eugenios (Old Greek) and Eugenius (Latin) are older forms of Eugene. The name in its various forms has been borne by several saints, notably the 5th-century bishop of Carthage, Eugenius, the 7th-century Archbishop of Toledo, Eugenius II, and four popes. The name had not been popular in Western Europe in the Middle Ages until it was promoted by the brilliant and upright Austrian field marshal Prince Eugene of Savoy (1663-1736), who defeated the French forces of Louis XIV. In literature, Eugene Marchbanks is a youthful poet in George Bernard Shaw's play Candida (1898). In Ireland, the name has been used as an Anglicization of Aodh and Eoghan. The name Eugenia (English, French, German, Greek, Italian, Polish, Portuguese, Romanian, and Spanish) is the female form of Eugene.

What are the Variant Forms of Eugene?

Eugene is a widely used name; it has 54 variants that are used in English and other languages. Variants used in English include Efigenio, Eoghan, Eugan, Eugean, Eugeen, Eugeni, Eugenie, Eugenio (also used in Italian and Spanish), Eugéne, Evgeney, Evgenie, and Ugene. The contraction Gene, and the pet form Gino are other English variants.

Eugene is a classic favorite. At present it is still somewhat popular as a baby name for boys, though it was in more widespread use previously. At the height of its usage in 1928, 0.850% of baby boys were given the name Eugene. Its ranking then was #20. The baby name has since experienced a marked loss in popularity, and is in recent years of occasional use. In 2018, its usage was only 0.013% and its ranking #862. Within the group of boy names directly linked to Eugene, Owen was the most frequently used. In 2018, its use outnumbered Eugene's by 37 times. Eugene has predominantly been a baby boy name, though in the past century it has also been used for girls. In 1932, 131 times as many baby boys than girls were given the name Eugene. 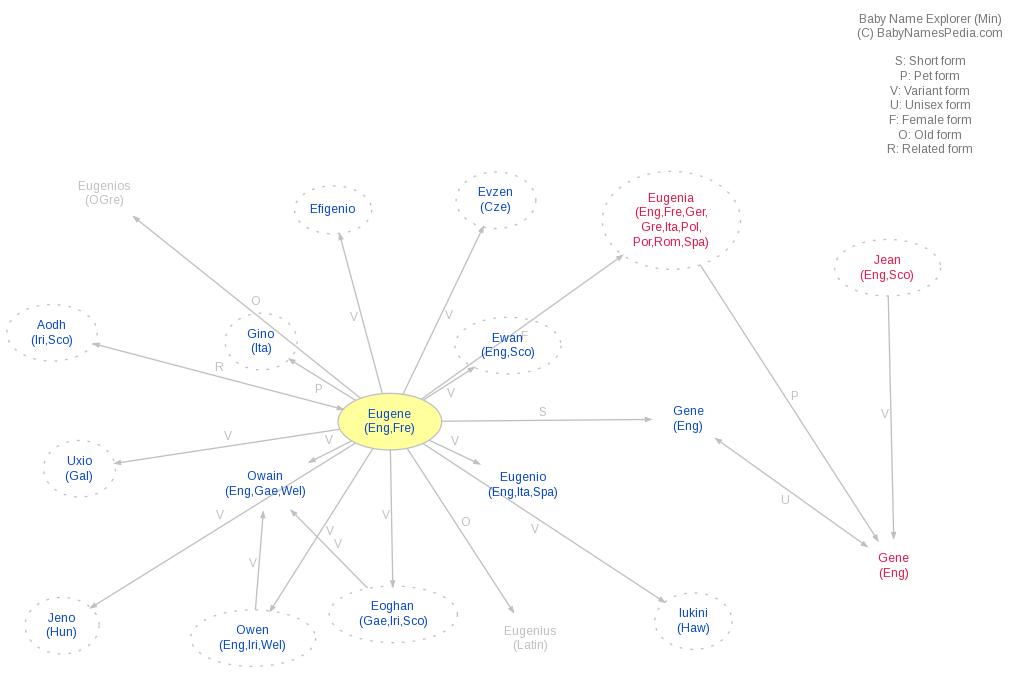