What does Eugenia mean?

[ 3 syll. eu-ge-nia, eug-en-ia ] The baby girl name Eugenia is pronounced Yuw-JHIYN-Yah or Yuw-JHIY-Niy-ah in English, eh-uh-GEHN-Yaa in Polish, or eh-uw-HHEH-NYaa in Spanish †. Eugenia has its origins in the Old Greek language. It is used largely in English, French, German, Greek, Italian, Polish, Portuguese, Romanian, and Spanish. It is derived from eugenes meaning 'well born, noble' ; eu 'good, well' ; genos 'birth, descent'. Eugenia was a semi-legendary 3rd-century saint of whom little is known; she supposedly disguised herself as a man and became an abbot in a monastery. The name was in use by English speakers in the Middle Ages, although it was not popular. The form Eugénie was later popularized in 19th-century England out of sympathy and respect for Napoleon III's wife, the French Empress Eugénie (1826-1920), who lived much of her later years in England. The asteroid '45 Eugenia' was named after her. In recent times, the name is known from Princess Eugénie (1990-), one of the daughters of the Duke and Duchess of York. Eugenia is the feminine version of the English and French Eugene.

The name Eugenia is used to a great extent; it has 32 forms that are used in English and foreign languages. English forms of the name include Efigenia, Eugena, Eugenea, Eugenee, Eugeney, Eugeni, Eugenina, Eugeny, Eugina, Eugyna, Eugynia, Eugynie, Eujanie, and Evgenya. Other English forms include the diminutives Gene, Genie, and Gina (used in Italian, and Scandinavian as well).

Eugenia is uncommon as a baby girl name. At the modest height of its usage in 1919, 0.052% of baby girls were named Eugenia. It had a ranking of #260 then. The baby name has substantially dropped in popularity since then, and is currently of only sporadic use. Within all girl names in its family, Eugenia was nevertheless the most regularly used in 2018. 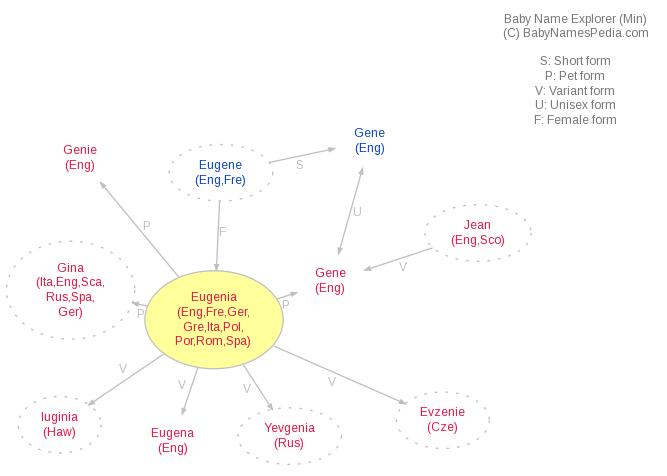