What does Eulalia mean?

[ 4 syll. eu-la-lia, eul-al-ia ] The baby girl name Eulalia is pronounced Yuw-LEY-Liy-ah in English †. Eulalia's origin is Old Greek, and its use, English, Italian, and Spanish. The meaning of Eulalia is 'sweetly-spoken, well-spoken'. It is derived from eu meaning 'good, well' ; lalein 'talk, chatter'. The name was borne by Saint Eulàlia of Barcelona (-304), a 13-year-old Roman Christian virgin who was martyred under Diocletian for trying to stop the persecution of Christians. Her cult spread to Anglo-Saxon England, giving rise to various accounts and legends about her life. She was for a time the most celebrated virgin martyr in Spain, and she is also a patron saint of Barcelona. Another Spanish saint who bore the name was Eulalia of Mérida (-364), although the two saints have sometimes been identified as the same person. Due to the fame of the saints, the name was popular among English speakers in the Middle Ages. Eulalia is the feminine equivalent of the Italian Eulalio.

See also the related form, the English and German Euphemia.

Eulalia is an uncommon baby girl name. At the modest height of its usage in 1904, 0.011% of baby girls were named Eulalia. It was #618 in rank then. The baby name has seen a steep decline in frequency since then, and is used only on a very light scale now. Within all girl names in its family, Eulalia was nevertheless the most popular in 2018. 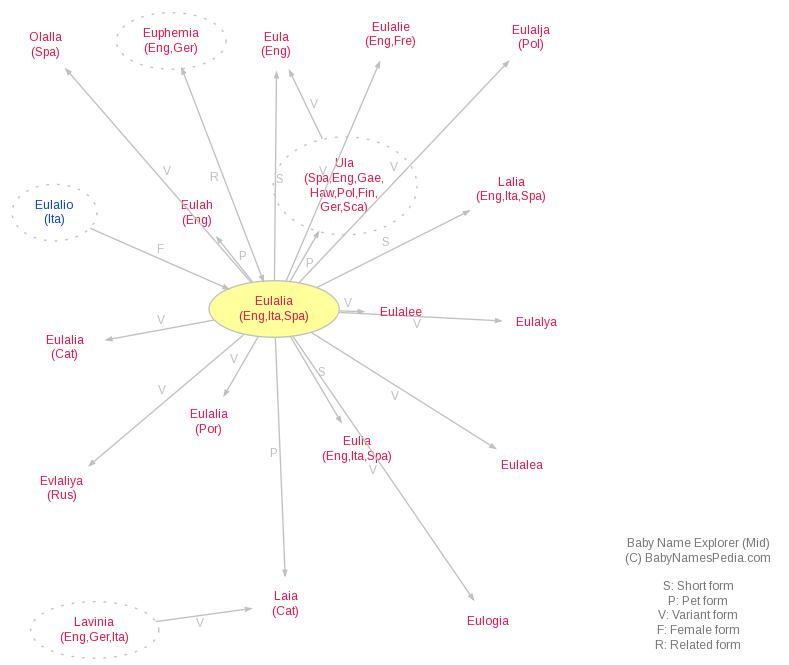