What does Euphemia mean?

[ 4 syll. eu-(p)he-mia, eup-hem-ia ] The baby girl name Euphemia is pronounced in English as Yuw-FEHM-iy-ah †. Euphemia is of Old Greek origin. It is used mainly in English and German. The name Euphemia means 'sweetly-spoken, well-spoken, well-regarded'. It is derived from eu which means 'good, well' ; phemi 'speech, voice'. The name was borne by various early saints, including Saint Euphemia, who was supposedly burnt at the stake at Chalcedon between 304 and 307. The name Euphemia is similar in meaning to Eulalia, and various legends of Saint Euphemia were also created via her cult following. The name was first taken up by English speakers in the 12th century and it saw a modest revival in the 19th century, particularly in Scotland where it was used as an Anglicized form of the Gaelic Oighrig. In England, the pet form Effie was popular in the Victorian era, although the full form was seldom used; it was then promoted by the character Effie Dean in the Walter Scott novel The Heart of Midlothian (1818). Euphemia is the feminine equivalent of the Russian Yefim.

Euphemia is unusual as a baby girl name. Its usage peaked modestly in 1903 with 0.005% of baby girls being named Euphemia. It had a ranking of #944 then. The baby name has experienced a decline in frequency since then, and is used on a very light scale now. Among the family of girl names directly related to Euphemia, Phoebe was the most widely used in 2018. 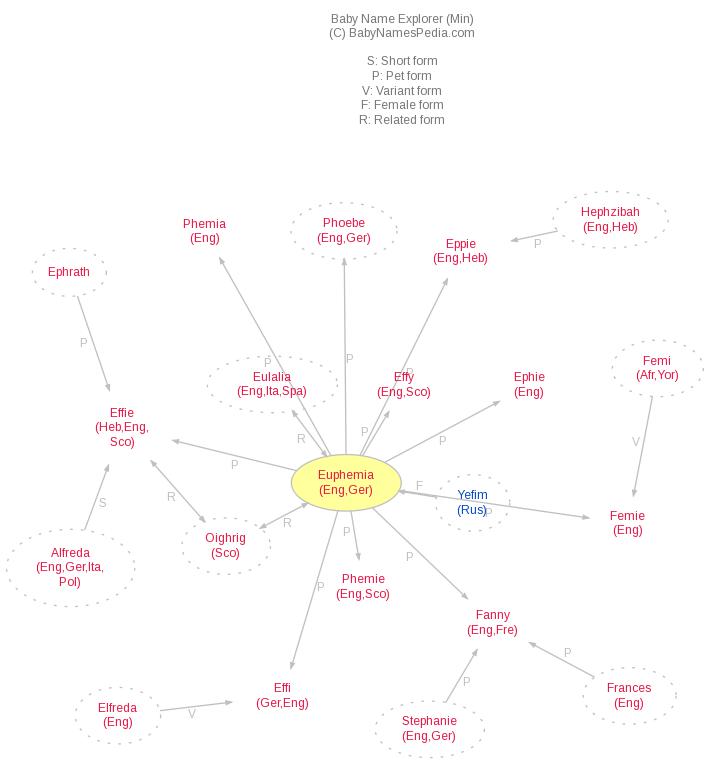