What does Evangeline mean?

[ 4 syll. e-van-ge-li-ne, ev-angel-ine ] The baby girl name Evangeline is pronounced iy-VAENJHeh-LayN- or iy-VAENJHeh-LiyiyN †. Evangeline's language of origin is Old Greek. It is predominantly used in English and French. It is from euangelion which means 'gospel, good news' ; eu 'good, well' ; angelma 'news, tidings'. The name is derived from the Latin element 'evangelium' or its Greek equivalent euangelion (meaning 'gospel, good news'), combined with the French feminine diminutive suffix '-ine'; the element is also the root of the English word 'evangelist'. It was possibly first created and popularized as the name of the central character Evangeline Belle-fontaine in the Henry Wadsworth Longfellow poem 'Evangeline, A Tale of Acadie' (1847). In the Harriet Beecher Stowe novel Uncle Tom's Cabin (1852), Evangeline is the actual name of the character Little Eva. Evangeline was later described as an American name by Charlotte M. Yonge. It is today common among Afro-Americans, and it has spread to the UK. Evangeline is the feminine version of the Greek Evangelos. 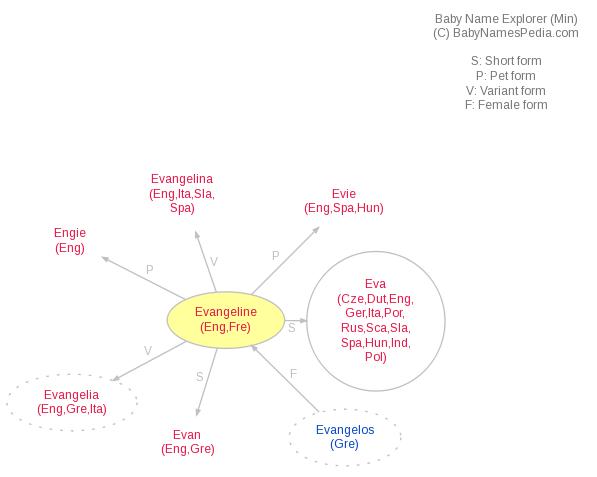