What does Evelyn mean?

[ 3 syll. e-ve-lyn, ev-el-yn ] The baby girl name Evelyn is also used as a boy name, though it is far more popular for girls. It is pronounced in English as EHV-ah-LihN or EHV-LihN †. Evelyn is of Hebrew and Old French origin. It is used mainly in English. Old French origin: It is from aveline which means 'hazelnut' ; avis 'bird'. The first name is derived from the English surname, which is itself from the Gaelic name Aibhilin (Old Irish) or Eibhlín (Old Irish) due to the pronunciation of '-bh-' as 'v'. The alternative pronunciation of a silent '-bh-' leads to the variant Eileen. The Gaelic names are derived from Aveline (Old French), which is of uncertain origin. Aveline could be from the Old French for 'hazelnut', or it could be from avis, or it could ultimately be a diminutive of Ava. Evelyn was adopted by English speakers as a feminine first name by the end of the 19th century. In literature, the Latinate form Evelina has been made known by the Fanny Burney novel Evelina (1778). See Evelyn for more information.

In addition, Evelyn is a form (English) of Eva.

Evelyn is also a form (English) of the English and French Eve.

See also the related forms, the German Ava and the Gaelic Eibhilin.

Evelyn is very popular as a baby girl name, and it is also perceived as trendy. Its usage peaked in 1919 with 1.134% of baby girls being named Evelyn. It had a ranking of #11 then. The baby name has experienced a marked decline in frequency since then. In 2018, it ranked at #10 with a usage of 0.562%, having regained some lost ground in the recent decade. Among all girl names in its family, Evelyn was the most popular. Evelyn was thrice as popular as the 2nd most popular name, Eva, in 2018. Evelyn has in the last century been mainly given to baby girls. There were 186 times more baby girls than boys who were named Evelyn in 1930. 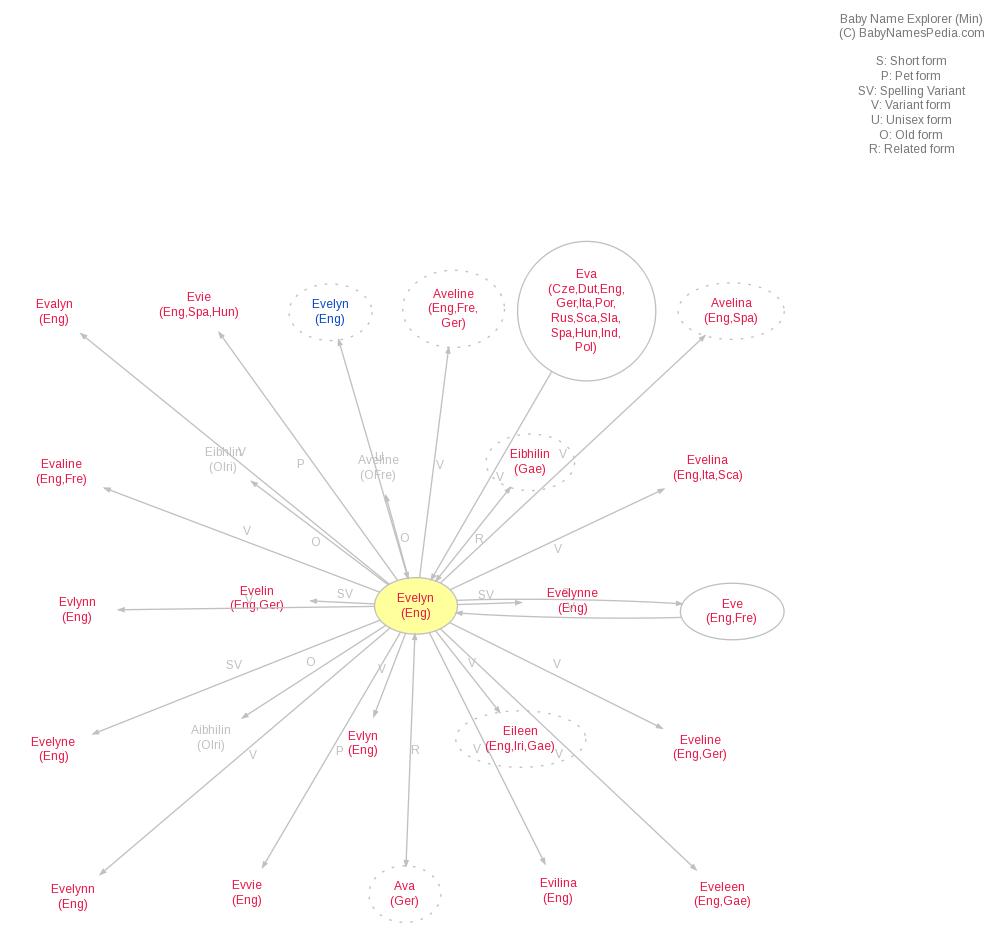