What does Ewart mean?

[ 2 syll. e-war(t), ew-a-rt ] The baby boy name Ewart is pronounced as YUW-aaRT †. Ewart is used mostly in Scottish, English, and Gaelic. Its language of origin is Old English, Germanic, and English. From English roots, its meaning is guardian of riches; ewe herder - in this context, Ewart can be used in the English and Gaelic languages. It is from the words 'ead' which means wealthy, blessed, happy ; 'weard' warden, guard. The first name is derived from an English and Scottish surname. The surname could be from a Norman form of Edward, or else it could be from the job title for an 'ewe herder', or else it could be from a place name in Northumbria of unknown meaning. The given name was first adopted in the 19th century, and it was then often bestowed in tribute to the Prime Minister of the UK, William Ewart Gladstone (1809-1898).

Ewart is a derivative of the English and Polish name Edward.

Ewart is also a derivative (Scottish) of the Dutch and English name Everard.

Ewart is not commonly used as a baby boy name. It is not in the top 1000 names. In 2018, among the family of boy names directly related to Ewart, Edward was the most frequently used. 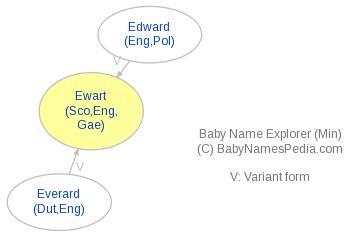