What does Fabius mean?

[ 3 syll. fa-biu(s), fab-i-us ] The baby boy name Fabius is pronounced as FAEB-iy-ahS- †. Fabius is used chiefly in the Latvian, Lithuanian, and German languages, and its origin is Latin. The name's meaning is grower of beans. It is from the element 'faba' which means bean. Fabius (Latin) is an old form of Fabius. The name is derived from the Roman family name, whose early bearers were presumably involved in the growing or selling of beans. The Roman clan of the Fabii was well-known for its prominent warriors, including Quintus Fabius Maximus (-203BC), the general who delayed and foiled Hannibal's invasion without direct fighting, and was nicknamed Cunctator meaning 'Delayer'. The Fabian Society, founded in 1884, was named after him; the society advocates democratic socialism without the use of conflict.

Fabius is a variant of the name Fabian (Dutch, English, German, and Polish) in the Latvian and Lithuanian languages.

The name Fabia (German, Italian, Portuguese, and Spanish) is the female form of Fabius.

Fabius is not regularly used as a baby name for boys. It is not listed in the top 1000 names. In 2018, out of the group of boy names directly linked to Fabius, Fabian was the most frequently used. 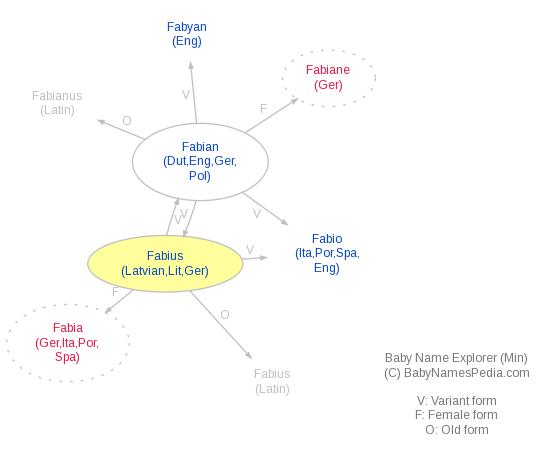