What does Faina mean?

[ 3 syll. fai-na, fa-ina ] The baby girl name Faina is pronounced as Faa-IY-Naa- †. Faina has its origins in the Old Greek language and it is used largely in Russian. The name is of uncertain meaning. It could be derived from Phaenna (Old Greek), which appeared in various texts on Greek mythology, and is ultimately of the element phaeinos, or else it could be related to the name Stephen.

In addition, Faina is a pet form of Stephanie (English and German) in the Russian language.

Faina is not popular as a baby name for girls. It is not listed within the top 1000 names. In 2018, among the group of girl names directly related to Faina, Stephanie was the most commonly used. 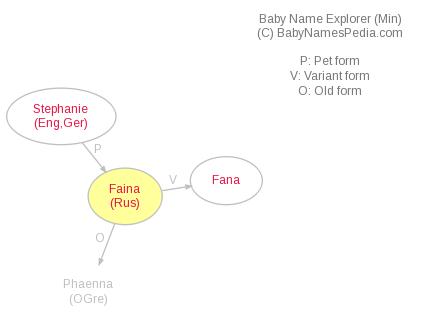