What does Faith mean?

[ 1 syll. fai-(t)(h), fa-i-th ] The baby girl name Faith is pronounced Fey-TH †. Faith's origin is English, and its use, English and Spanish. It is from faith ; fides meaning 'faith'. The first name is derived from the common English word, which is itself from the Latin fides. In Roman mythology, Fides was a goddess who presided over public transactions, along with two other goddesses who personified hospitality and oaths. The name was first adopted by English speakers in the 16th century, when it was used as a unisex name. Faith, Hope and Charity are the three great Christian virtues, and the name was thus popular with English Puritans in the 17th century. Unlike many other virtue names, it is still used today, albeit mainly for females. Faith and Hope are popular choices for naming twins, while Faith, Hope and Charity are commonly used for triplets. The short forms Fay and Faye were commonly used in the 19th and 20th centuries. Faith is the feminine version of the French Foy.

Faith has 16 forms that are used in English and foreign languages. English forms of the name include Faeth, Faethe, Faithe, Faithful, Fayana, Fayane, Fayanna, Fayanne, Fayette, Fayth, and Fealty. Other English forms include the contracted forms Fay and Faye, the familiar form Faithie, and the spelling variant Faythe. The Spanish Fe is a form of Faith that is used in foreign languages. 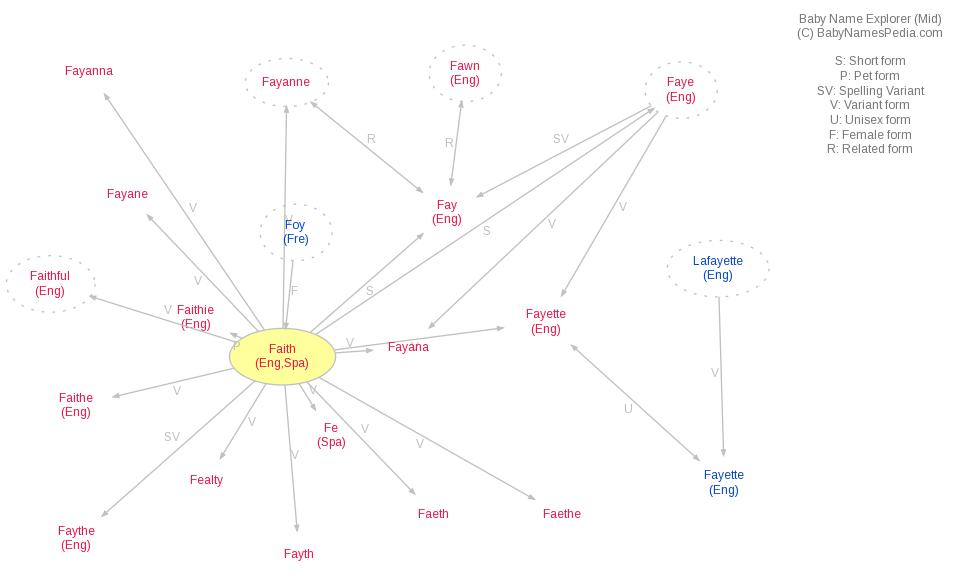