What does Fallon mean?

[ 2 syll. fal-lon, fa-ll-on ] The baby girl name Fallon is also used as a boy name, though the use for girls is far more popular. It is pronounced FAHLLihN †. Fallon's language of origin is Celtic and it is predominantly used in English. The name Fallon means 'descendent of Fallamhan; descendant of the leader'. The first name is derived from the Irish surname, which is itself from the Gaelic surname Ó Fallamhain meaning "descendent of Fallamhan". Fallamhan is a given name from the element follamhnus with the connotative meaning 'leader'. This was known as the name of the fictional female lead and heiress Fallon Carrington Colby in the American TV series Dynasty (1981-1989); the name thus gained popularity in the 1980s. In the UK, it is known as the name of a character from the BBC radio soap opera The Archers (1950-).

Fallon is a rare baby girl name. At the modest peak of its usage in 1982, 0.034% of baby girls were named Fallon. It had a ranking of #376 then. The baby name has steeply slipped in popularity since then, and is currently used only on an infrequent scale. Out of all girl names in its family, Fallon was nevertheless the most popular in 2018. In the last century Fallon has mainly been a baby girl name. 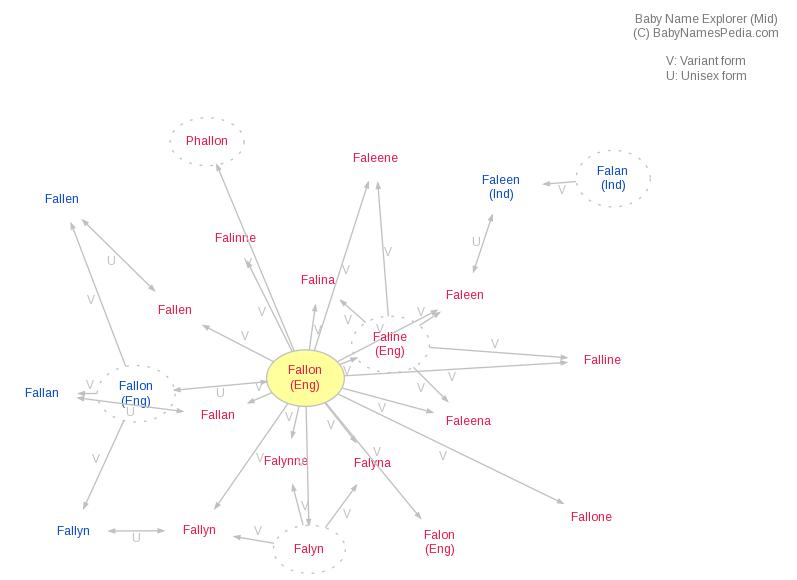