What does Felicia mean?

[ 3 syll. fe-li-cia, fel-ic-ia ] The baby girl name Felicia is pronounced Fah-LIY-SHah in English, Feh-LIY-CHYaa in Romanian, Feh-LIY-THYaa in Spanish, or Feh-LIY-SYaa in Spanish-Latin American †. Felicia has its origins in the Latin language. It is used largely in Dutch, English, Hungarian, Italian, Polish, Romanian, Scandinavian, and Spanish. The meaning of Felicia is 'lucky, happy, successful'. It is derived from the word felix which is of the meaning 'lucky'. The name evolved as a Latinized feminine form of Felix; it has been used by English speakers since the medieval period.

Felicia is a form of the English Felicity.

What are the Variant Forms of Felicia?

The name Felicia is used to a great extent; it has 61 forms that are used in English and foreign languages. English forms of the name include Falecia, Faleshia, Falesia, Falisha, Felcia, Feleicia (used in Spanish too), Feleta, Felicea, Felicee, Felicey, Felici, Felicidad, Felicienne, Felicija, Feliciona, Felicitas (used in Italian too), Felicity, Felicy, Felidtas, Felis, Felisberta, Felisha, Felisia, Feliss, Felita, Felixia, Felysia, Felyssia, Filicia, and Phelicia. Other English forms include the contracted forms Felica (used in Spanish too), Felice (used in French too), and Licia (used in Italian too), the familiar forms Flick, Flicka, Lecia, and Lisha, and the spelling variants Falicia (used in Spanish too) and Felecia.

Felicia is uncommon as a baby girl name. At the modest height of its usage in 1986, 0.167% of baby girls were named Felicia. It was #90 in rank then. The baby name has seen a substantial drop in frequency since then, and is used only on a very light scale now. In 2018, within the family of girl names directly related to Felicia, Felicity was the most popular. 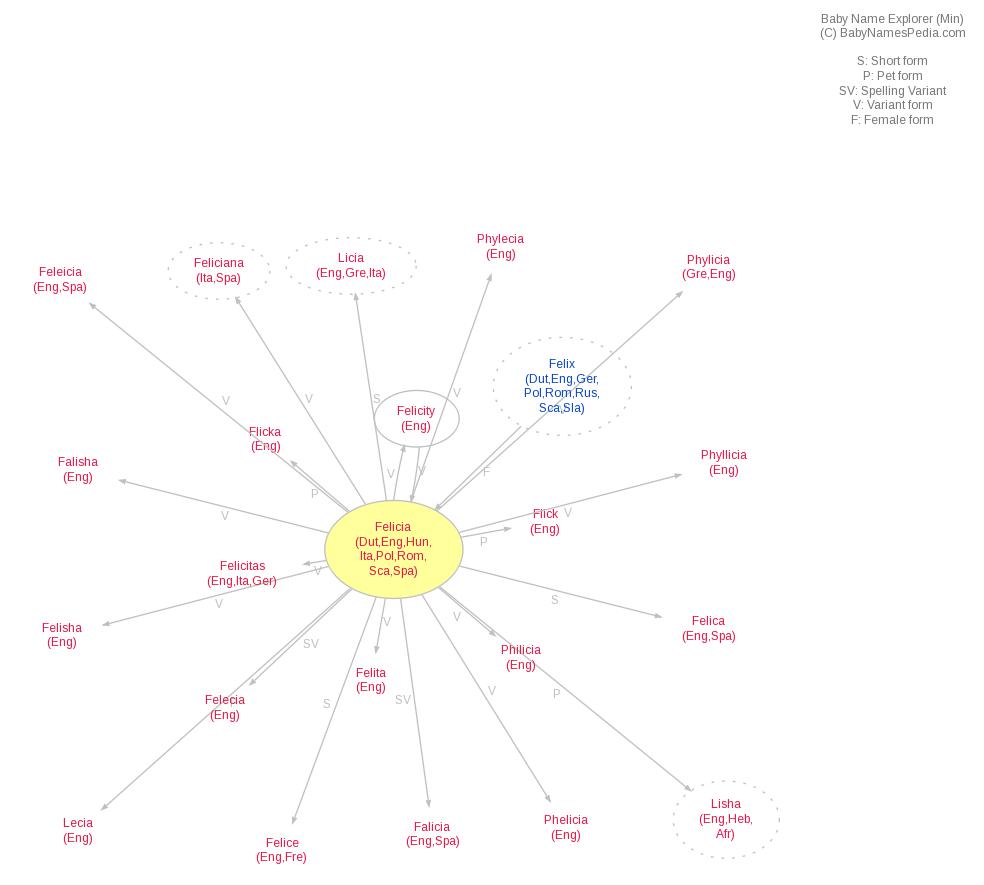