What does Felicity mean?

[ 4 syll. fe-li-ci-ty, fel-ic-ity ] The baby girl name Felicity is pronounced Feh-LIHS-ih-Tiy- †. Felicity's language of origin is Latin and it is predominantly used in English. The meaning of Felicity is 'good luck, good fortune, happiness'. It is from felicity ; felicitas which means 'fertility, fortune'. The first name is from the common English word, which is derived via Old French from Felicitas (Latin) and ultimately the element felicitas (meaning 'fertility, fortune'). In Roman mythology, Felicitas was the goddess or personification of good luck and success. It was a rather popular Roman name also known from various saints, most notably a 3rd-century slave martyred with her mistress Perpetua. The name Felicity was first adopted by English Puritans in the 17th century, among other virtue names. It saw a revival in the late 20th century, boosted by the popularity of the US primetime TV drama Felicity (1998-2002).

Felicity is a form of Felicia in the English language.

The name Felicity is widely used; it has 35 forms that are used in English and foreign languages. English forms of the name include Felecia, Felicia, Feliciona, Felicitee, Feliciti, Felicitie, Felise, Felisha, Felita, Feliza, Filicia, Flic, and Lici. Other English variants include the familiar forms Flick, Lis, Liss, Lissa, Lissie, Lucky, and Phil. 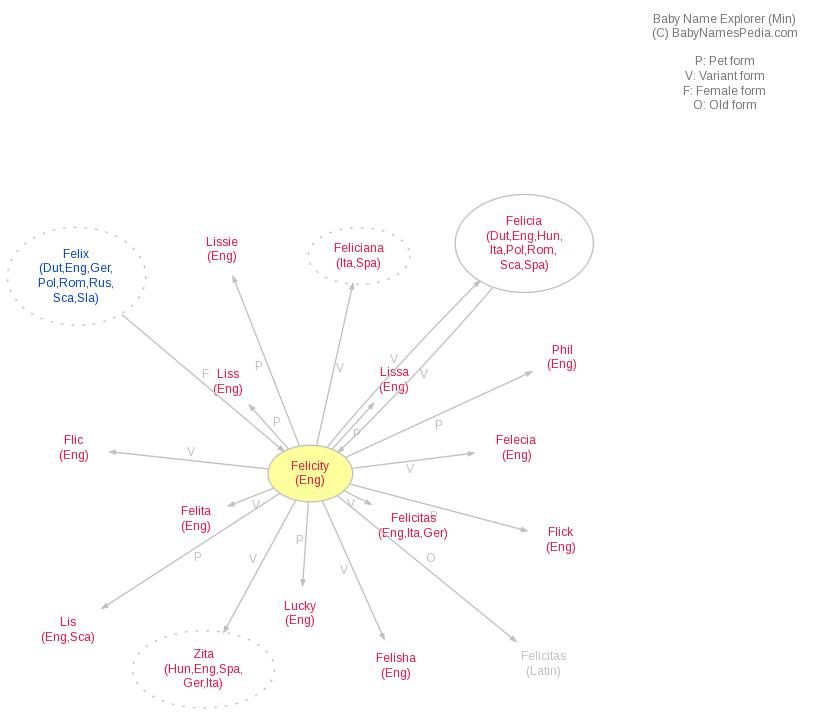