What does Felix mean?

[ 2 syll. fe-lix, fel-ix ] The baby boy name Felix is pronounced in English as FIY-LihKS, in Dutch as FEY-LihKS, or in German as FEH-LihKS †. Felix is used predominantly in the Dutch, English, German, Polish, Romanian, Russian, Scandinavian, and Slavic languages, and it is derived from Latin origins. The name's meaning is lucky, happy, successful. The first name is derived from a Roman nickname Felix (Latin) of the element 'felix'.

The byname was adopted by the Roman dictator Sulla (138-78 BC), who believed that he was particularly blessed with luck by the gods. In the Bible, the name was borne by the governor of Judea who imprisoned Paul. The auspicious meaning of the name made it popular among English speakers in medieval times, especially among Christians in allusion to their happiness in finding their faith; it has to date been borne by 5 popes and 67 saints listed in the Roman martyrology. The name later saw a revival in popularity in the 19th century. As a name, Felix has sometimes been associated with a cat, as the Latin word for a cat is 'felis'; Felix the Cat (1919-) is a cartoon character created in the silent film era. The name has also been borne by the lead character of George Eliot's novel Felix Holt (1866). In Ireland, the name has been used as an English form of Phelim. The name Felicia (Dutch, English, Hungarian, Italian, Polish, Romanian, Scandinavian, and Spanish) and the name Felicity (English) are the female versions of Felix.

The name Felix is widely used; it has 31 variants that are used in English and other languages. Variants used in English include Fee, Felice (used in Italian as well), Felicianus, Felicien, Felicio, Felicius, Felike, Feliz, Felizio, Felíx, Felo, Felyx, Félice, Filix, and Phelix.

Felix is a popular baby name for boys, and it is also viewed as trendy. Its usage peaked modestly in 1902 with 0.086% of baby boys being given the name Felix. It ranked at #154 then. The baby name has since declined in popularity. In 2018, its usage was 0.085% and its ranking #231, appearing with somewhat increasing regularity in the recent decade. Among all boy names in its group, Felix was the most popular. 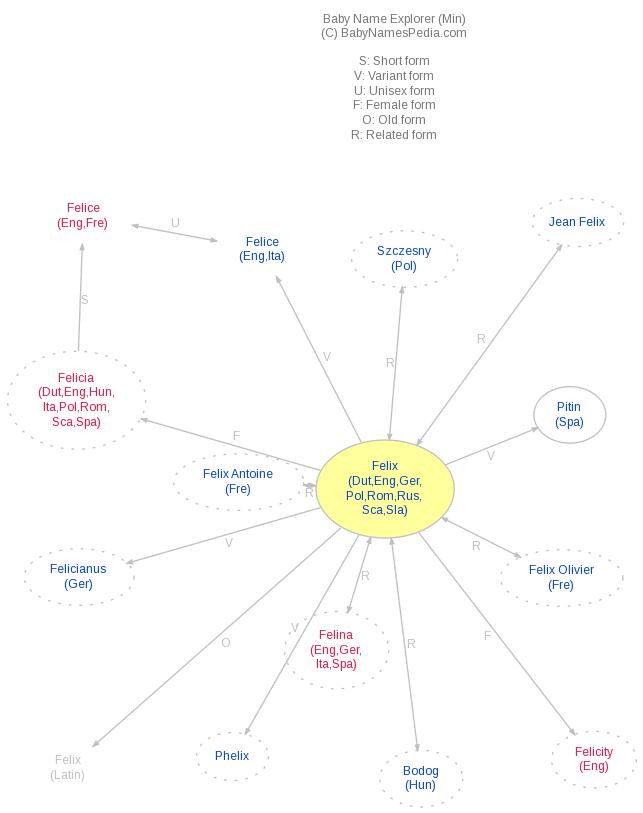