What does Ferdinand mean?

[ 3 syll. fer-di-nan(d), fe-rdina-nd ] The baby boy name Ferdinand is pronounced as FAHR-Dih-NaeND in English or FEHR-Diy-NaaNT in Dutch and German †. Ferdinand is largely used in the English, French, German, Portuguese, and Spanish languages, and it is derived from Gothic origins. The name is of the meaning peace through bravery, bold protector, bold journey. The old form Fridunanth (Gothic) is of the elements 'frith' (meaning peace, protection, safety) and 'nanth'; Fridenand (Germanic) is of the Germanic 'fridu' (peace, protection, safety) and 'nand'. Alternatively, the name could be from the Old German or Visigothic 'farth' and 'nand'.

The name was borne by three Holy Roman emperors in the medieval period. The name was introduced by the Normans to England in the 11th century, sometimes as Ferrand (Old French) or Ferrant (Old French). In Spain, the name was introduced by the Visigoths; it was used by early Spanish royalty, including Ferdinand the Great (-1065) who was king of Castile and Leon, and Ferdinand V (1479-1516) who was the financier of Christopher Columbus. The name was later borne by Austro-Hungarian royalty following a marriage between the two royal families. The name was popular as a Spanish name following the marriage of Mary I and Philip II of Spain in 1554, contributing to its adoption among English speakers in the 16th century. In Ireland, the name is taken as an Anglicized form of the Gaelic Fearadhach and Feardorcha. The name Fernanda (English, Italian, Portuguese, and Spanish) is the female equivalent of Ferdinand.

The name Ferdinand is used to a great extent; it has 31 variants that are used in English and other languages. Variants used in English include Ferdinan, Ferdinandus, Ferdinánd, Ferdo, Fernan, Fernandas, Fernande, Ferran (also used in Catalan), Ferrand, Ferrando, and Ferrante. Other English variants include the contraction Ferd, and the pet forms Ferdie, Ferdy, Nando, and Nandy.

Ferdinand is uncommon as a baby name for boys. At the modest height of its usage in 1914, 0.030% of baby boys were given the name Ferdinand. Its ranking then was #320. The baby name has since dropped out of favor, and is now of sporadic use. In 2018, within the group of boy names directly linked to Ferdinand, Fernando was the most popular. 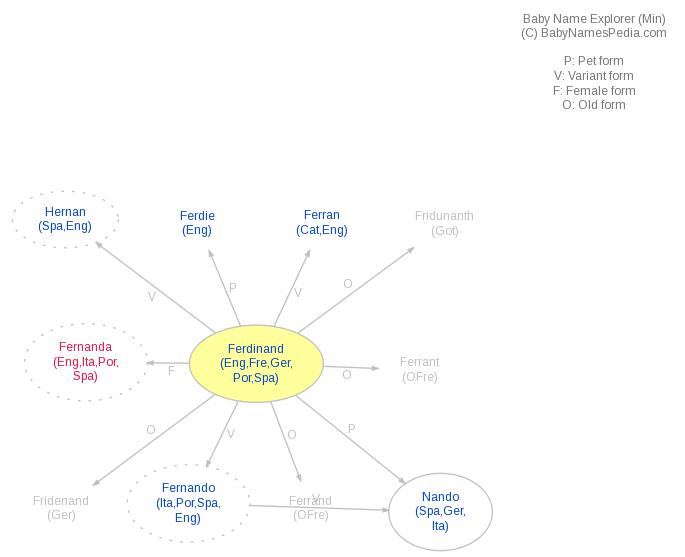