What does Fidel mean?

[ 2 syll. fi-del, fid-el ] The baby boy name Fidel is sometimes used as a girl name. Its pronunciation is Fiy-DEHL †. Fidel is used predominantly in the English, German, and Spanish languages, and its origin is Latin. It is derived from the element 'fidelis' which means faithful. Fidelis (Latin) is an old form of Fidel. The name was borne by Saint Fidelis of Como (-304), an Italian soldier-saint, but is today best known from the left-wing Cuban President Fidel Castro (1926-). It is also known from Beethoven's Fidelio (1805), a German opera in two acts. The name Fidelia (Spanish) is the female version of Fidel.

Fidel has 16 variants that are used in English and other languages. Variants used in English include Fadelio, Fedelio, Fidal, Fidalio, Fidele, Fidelis (used in German too), Fidelity, Fidelix, Fidell, Fidello, Fidelo, Fidèle, and Fido. Fedele (Italian), Fidelio (Italian and Spanish), and Fidelius (German) are foreign variants of Fidel.

Fidel is a rare baby name for boys. At the modest peak of its usage in 1995, 0.009% of baby boys were given the name Fidel. It ranked at #778 then. The baby name has since experienced a fall in popularity, and is currently of irregular use. Out of all boy names in its group, Fidel was nonetheless the most popular in 2018. In the past century Fidel has mostly been a baby boy name. 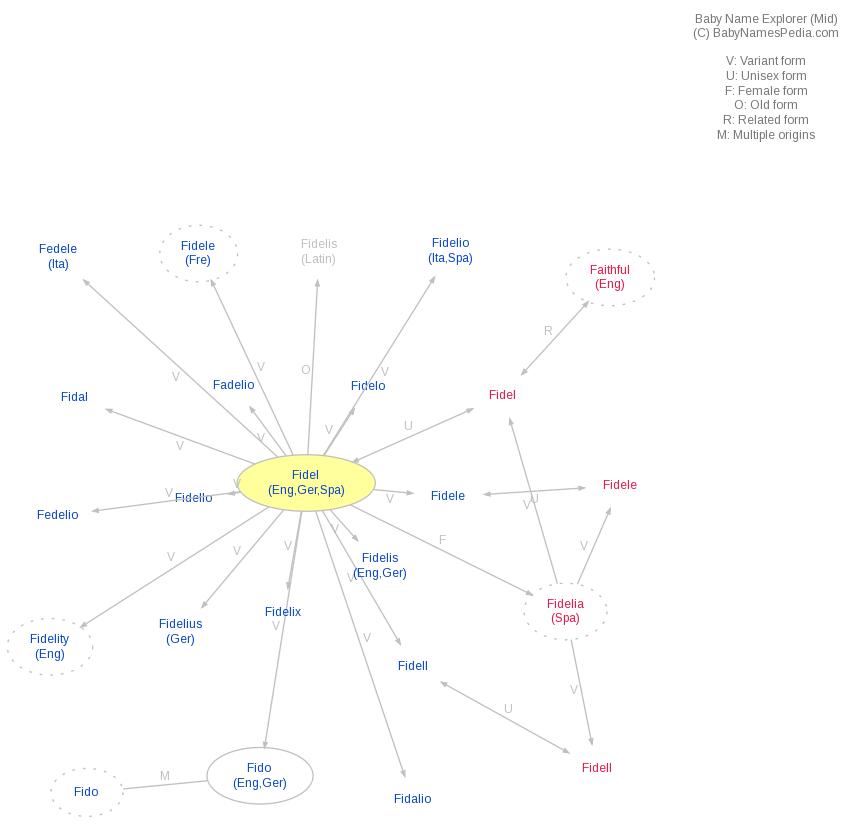