What does Fiona mean?

[ 3 syll. fio-na, fi-ona ] The baby girl name Fiona is pronounced Fiy-OWNaa- †. Fiona's origin is Celtic, and its use, English, Gaelic, German, and Scottish. The meaning of Fiona is 'fair, blond'. It is derived from the word fionn which is of the meaning 'white, fair'. The name was first invented by James Macpherson (1736-1796) for his Ossianic poem Fingal (1762), and it was subsequently adopted by 18th-century English speakers. The popularity of the name was given a boost when it was known as the pseudonym Fiona Macleod, which was used by the Scottish romantic writer William Sharp (1855-1905) and kept almost secret during his lifetime. The name has since been used beyond Scotland. It is sometimes taken as an Anglicized form of the Irish Fíona. Fiona is the feminine equivalent of the English and Irish Finn.

The name Fiona is widely used; it has 32 forms that are used in English and foreign languages. English forms of the name include Fenella, Fennella, Ffion, Ffiona, Ffyona, Fifi, Fina, Finella, Finelle, Finn, Finna, Finola, Fionah, Fionavar, Fione, Fionn, Fionne, Fionnghuala, Fionnia, Fionnuala, Fionnula, Fionola, Fiora, Fynballa, Fyoni, Phionah, Phyona, and Tiona. Other English forms include the contracted form Fi, and the spelling variant Fionna. The Scottish Phiona is a form of Fiona that is used in foreign languages. The spelling variant Fyona (Irish) is another foreign form.

See also the related form, the English and Irish Fíona. 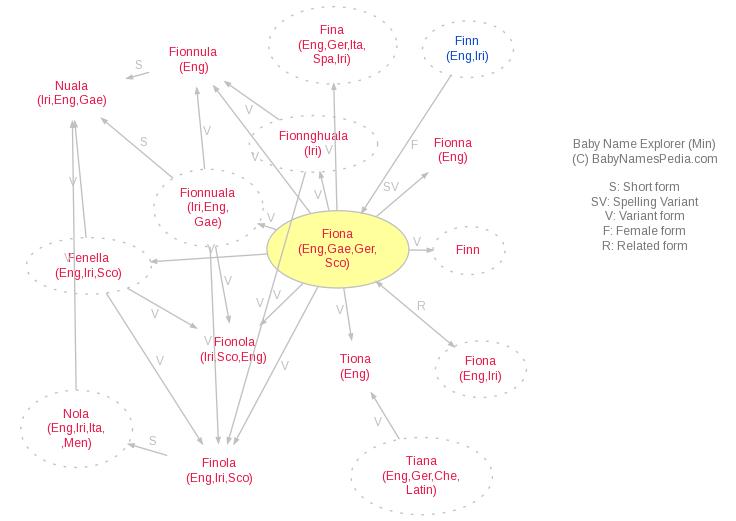