What does Flor mean?

[ 1 syll. flor, fl-or ] The baby girl name Flor is pronounced as FLaoR or FLuh-R †. Flor is used chiefly in English and Spanish. Its origin is Latin.

Flor is a variant of the name Flora (English, German, Italian, Polish, and Russian) in the English and Spanish languages.

Flor is also a contracted form of the name Florence (English and French).

Flor is rare as a baby girl name. At the modest peak of its usage in 2005, 0.014% of baby girls were named Flor. It was #905 in rank then. The baby name has substantially slipped in popularity since then, and is today of infrequent use. In 2018, out of the family of girl names directly related to Flor, Florence was the most popular. 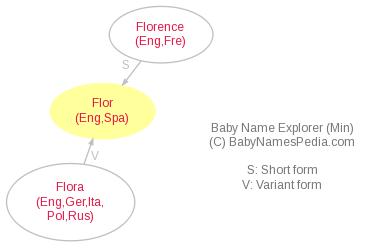