What does Flora mean?

[ 2 syll. flo-ra, fl-ora ] The baby girl name Flora is pronounced FLOWR-ah (English) †. Flora's language of origin is Latin. It is predominantly used in English, German, Italian, Polish, and Russian. It is derived from the word flos which is of the meaning 'flower, blossom'. An old form of the name is Flora (Latin). The Roman name was borne by the goddess of flowers and the season of spring in Roman mythology. The masculine form of Flora was the Roman family name Florus. The name was introduced into English from Scotland before the 18th century, but it was used mainly as a name for spaniels. The name was popularized in 18th century Scotland and other English speaking countries by the fame of Flora Macdonald (1722-1790), who was known for her daring rescue of Bonnie Prince Charlie following the latter's defeat at the Battle of Culloden in 1746. Her Gaelic name was Fionnghal, a form of Fionnghuala. Flora is the feminine form of the German Florus.

What are the Variant Forms of Flora?

The name Flora is widely used; it has 67 forms that are used in English and foreign languages. English forms of Flora include Fiore, Fiorel, Fiorella, Fiorenza, Firenze, Fjola, Flaura, Fleur (used in French too), Fleurette, Flor (used in Spanish too), Floramaria, Flordelis, Flore (used in French too), Florella, Florelle, Florene, Floressa, Florette, Florey, Flori, Floria (used in Basque and Spanish too), Florian, Floriana (used in Italian too), Floriane, Floriann, Florianna, Florianne, Florica, Florice, and Florida. Other English variants include the contracted forms Flo and Lore, and the familiar forms Florrie and Florry.

Flora is a rare baby girl name. At the modest peak of its usage in 1902, 0.209% of baby girls were named Flora. It was #100 in rank then. The baby name has suffered a steep decline in frequency since then, and is used only on a very light scale today. Out of all girl names in its family, Flora was nevertheless the most widely used in 2018. The name Flora has been primarily given to baby girls, although it has also been used as a boy name in the last century. In 1904, 34 times more baby girls than boys were given the name Flora. 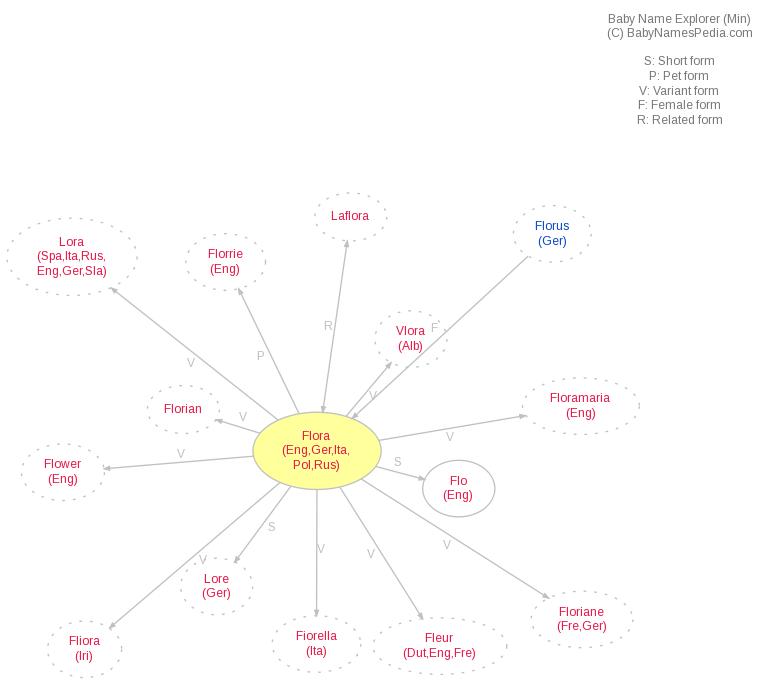