What does Florian mean?

[ 3 syll. flo-rian, fl-ori-an ] The baby boy name Florian is sometimes used as a girl name. It is pronounced in German as FLOW-Riy-aaN or in Polish as FLAOR-YaaN †. Florian is used chiefly in the English, French, German, and Polish languages, and it is derived from Latin origins. It is derived from the element 'flos' meaning flower, blossom. Florianus (Latin) is an original form of Florian. The name was borne by Saint Florian (-304), who was martyred under the Roman emperor Diocletian. He is the patron saint of Poland and Upper Austria, and of firefighters. The name was used, albeit rarely, by English speakers since the medieval period. The name Floriane (French and German) is the female form of Florian.

Florian is unusual as a baby name for boys. Its usage peaked modestly in 1917 with 0.013% of baby boys being given the name Florian. Its ranking then was #528. The baby name has since experienced a substantial fall in popularity, and is today of infrequent use. Among all boy names in its group, Florian was nonetheless the most regularly used in 2018. Florian has predominantly been a baby boy name in the past century.

Baby names that sound like Florian include Floriano, Florent, Florián, Florin, and Flurin. 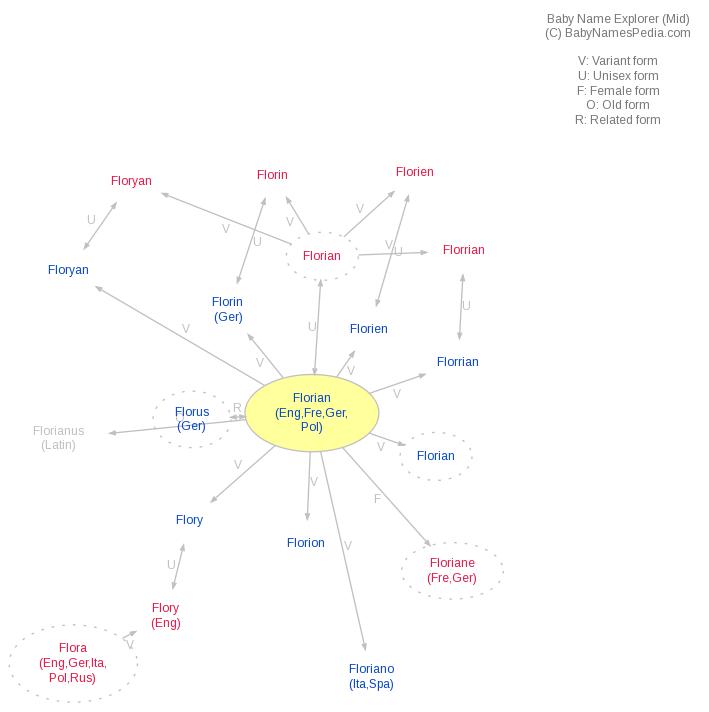