What does Floyd mean?

[ 1 syll. floy(d), fl-o-yd ] The baby boy name Floyd is pronounced FL-oyD †. Floyd is of Celtic origin and it is used mainly in English. The name Floyd means 'gray; gray-haired'. The first name is derived from the English surname, which is from the Welsh surname Lloyd, which is itself from the word llwyd. The Welsh surname could have been a byname for someone with gray hair. The name was common among Afro-Americans and in the southern parts of USA.

Floyd is uncommon as a baby boy name. At the modest height of its usage in 1901, 0.366% of baby boys were named Floyd. It had a ranking of #46 then. The baby name has seen a marked drop in popularity since then, and is currently of only infrequent use. Within all boy names in its family, Floyd was nevertheless the most popular in 2018. 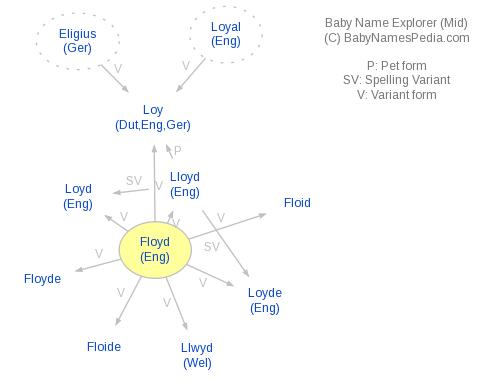