What does Frances mean?

[ 2 syll. fran-ces, fr-anc-es ] The baby girl name Frances is also used as a boy name, though it is far more popular for girls. It is pronounced FRAENSahS †. Frances is of Italian origin and it is used mainly in English. The meaning of Frances is 'Frenchwoman, free one'. It is derived from the word francesco with the meaning 'frenchman'. Both Frances and Francis were originally used as unisex names; the distinction in spelling and the adoption of Frances by English speakers as the feminine equivalent of Francis started from the 17th century. Saint Frances Xavier Cabrini (1850-1917), the founder of the Missionary Sisters of the Sacred Heart, was the first American citizen to be canonized as a saint. Frances is the feminine version of the English Francis.

What are the Variant Forms of Frances?

Frances is an all-time favorite. Today it is still rather popular as a baby girl name, but not as much as it was previously, and it is also perceived as trendy. At the height of its usage in 1918, 1.341% of baby girls were named Frances. It was #8 in rank then. The baby name has markedly dropped in popularity since then. In 2018, it ranked at #445 with a usage of 0.039%, having regained some lost ground in the recent decade. Within all girl names in its family, Frances was the most popular. Frances was used 6.906% more than the 2nd most popular name, Francesca, in 2018. Frances has in the last century been primarily given to baby girls. In 1947, 159 times more baby girls than boys were given the name Frances. 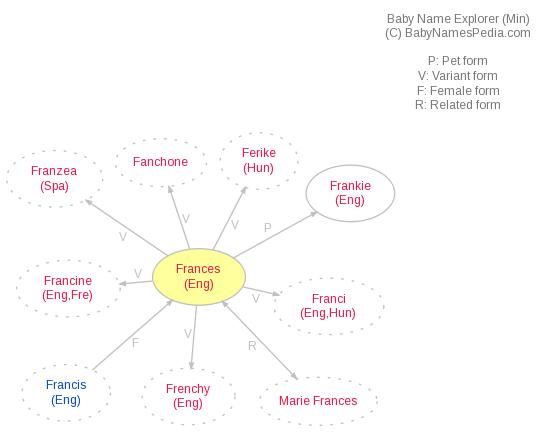