What does Francisco mean?

[ 3 syll. fran-cis-co, fr-anci-sco ] The baby boy name Francisco is pronounced FRaaN-THIYS-Kow (Spanish) or FRaaN-SIYS-Kow (Spanish-Latin American) †. Francisco has its origins in the Italian language, and it is used largely in Portuguese and Spanish. Francisco is a variant of Francis (English).

The pet forms Chico (Portuguese and Spanish), Curro (Spanish), Paco (Spanish), and Pancho (Spanish) are variants of the name.

Francisco is an all-time favorite. At present it is still popular as a baby name for boys, though it was in more widespread use before. The name's popularity grew from the 1910s up to the 1990s. At the modest peak of its usage in 1995, 0.144% of baby boys were named Francisco. Its ranking then was #125. The baby name has since experienced a decline in popularity. In 2018, it ranked at #285 with a usage of 0.064%, but it was nevertheless the most popular out of all boy names in its group. Francisco was twice as popular as the subsequent ranked name, Francis, in 2018. 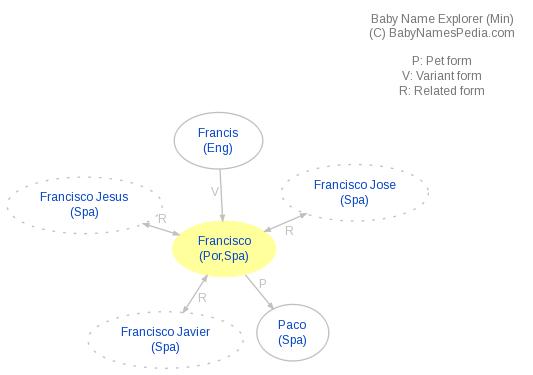