What does Franco mean?

[ 2 syll. fran-co, fr-a-nco ] The baby boy name Franco is pronounced as FRAE-NKow †. Franco is used chiefly in Italian and Spanish. Its origin is Italian and Germanic.

Franco is also a variant of the name Frank (English and German) in the Italian and Spanish languages.

Franco is somewhat popular as a baby boy name. The name's popularity has been growing since the 2000s. Its usage peaked modestly in 2016 with 0.018% of baby boys being named Franco. It was #695 in rank then. In 2018, its usage was 0.014% and its ranking #808. Among the family of boy names directly related to Franco, Frank was the most commonly used. In 2018, the name was thrice as popular as Franco.

There are no famous persons named Franco. 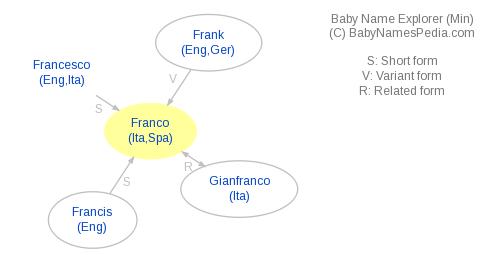