What does Frank mean?

[ 1 syll. fran(k), fr-a-nk ] The baby boy name Frank is pronounced as FRAENGK †. Frank is used chiefly in the English and German languages, and its origin is Italian and Germanic. From Germanic roots, its meaning is Frenchman, free one. It is from the element 'franko' meaning Frank. This was originally a name given to a member of the Franks, a 3rd-century West Germanic tribe, whose tribal name was derived from their distinctive spear, the Francisca, much like the Saxons were named after their characteristic knife, and the Lombards their halberd. After the 4th-century migration of the Franks into Gaul, the term Frank was taken to mean 'Frenchman'. 'France', derived from the Latin 'Francia', also replaced 'Gaul' as the country name. As the Franks fought for freedom against the Romans, their name was later taken to mean 'free'. The first name has been increasingly used among English speakers since the mid-19th century.

In addition, Frank is a short form of the name Francis (English).

The name Franka (German and Italian) is the female form of Frank.

The name Frank is used to a great extent; it has 26 variants that are used in English and other languages. Variants used in English include Francke, Frang, Franke, Frankea, Frankee, Frankey, Franki, and Franklyn. The diminutive forms Frankie and Franky are other English variants.

Frank is a classic favorite. At present it is still fairly popular as a baby name for boys, though it was in more widespread use before. In 1900, 2.143% of baby boys were given the name Frank. It ranked at #8 then. The baby name has since suffered a substantial fall in popularity, and is today of occasional use. In 2018, its usage was only 0.042% and its ranking #392, but it was nonetheless the most popular out of all boy names in its group. In 2018, 16% more boys were named Frank than the next ranked name, Franklin. The name Frank has mostly been a baby boy name, though it has also been given to girls in the past century. In 1939, the name Frank was given to 184 times as many baby boys than girls. 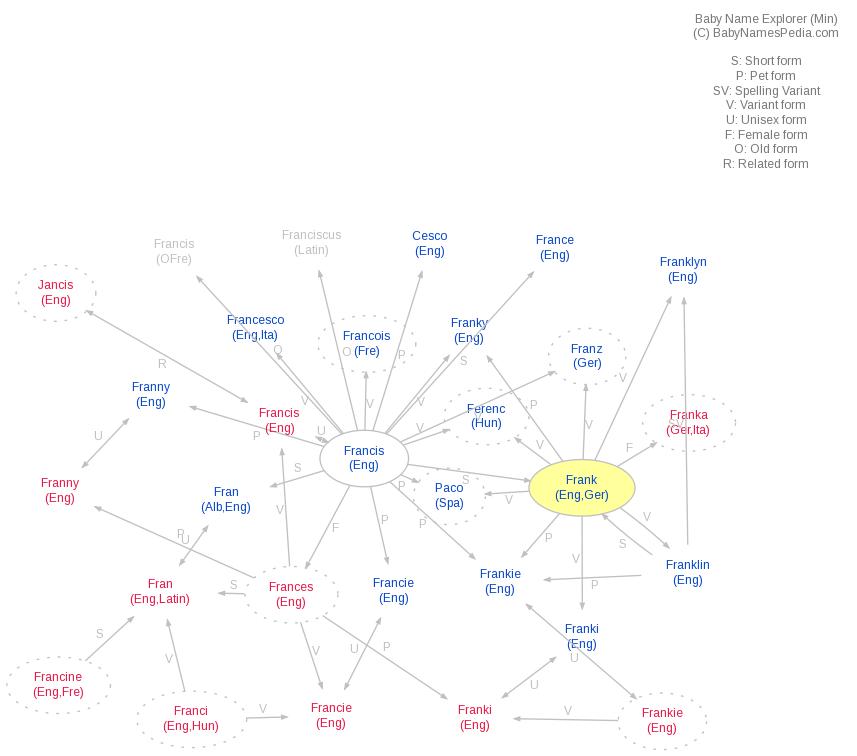