What does Frankie mean?

[ 2 syll. fran-kie, fr-ank-ie ] The baby girl name Frankie is also used as a boy name, though it is more often a girl name. It is pronounced FRAE-NGKiy- †. Frankie is of Italian and Germanic origin. It is used mainly in English. The name is well-known from the American traditional popular song Frankie and Johnny (1904), in which Frankie is the heroine who shot her man Johnny for cheating on her.

Frankie is also a familiar form (English) of the English and French Francine.

Forms of Frankie include the names Frankea, Frankee, Franki, and Franky.

Frankie is an all-time favorite. Today it is still somewhat popular as a baby girl name, but to a lesser degree than it was before, and it is also regarded as trendy. At the modest peak of its usage in 1934, 0.054% of baby girls were named Frankie. It was #257 in rank then. The baby name has suffered a marked decline in popularity since then. In 2018, it ranked at #808 with a usage of 0.018%, having regained some lost ground in the recent decade. Out of the family of girl names directly related to Frankie, Frances was the most regularly used. The name was twice as popular as Frankie in 2018. Though there were times from 1945 to 2014 when more boys than baby girls were given the name Frankie, the name is today more frequently used for baby girls. In 2017, 42% more baby girls than boys were given the name Frankie. 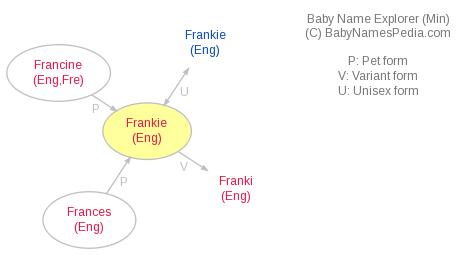