What does Freda mean?

[ 2 syll. fre-da, fr-eda ] The baby girl name Freda is pronounced as FR-IYD-ah †. Freda is primarily used in English, German, and Welsh, and its language of origin is Old English, Germanic, and Celtic. Germanic origin, English use: It is derived from the element 'fridu' which is of the meaning peace, protection, safety. The name evolved from the short form of other names containing the syllable 'freda' or 'fred'.

In addition, Freda is an English and German contracted form of the English, German, Italian, and Polish name Alfreda.

Freda is also a contracted form of the English name Elfreda.

Freda is also an English contracted form of the English, Italian, and Portuguese name Frederica.

Freda is also an English and Welsh pet form of the English, German, and Welsh name Winifred.

Freda has 16 forms that are used in English and other languages. English forms include Fraida, Frayda, Frayde, Fraydyne, Fredda, Fredia, Freeda, Freeha, Freida, Frida (used in German too), Frieda (used in German too), and Halfrida. Other English variants include the contracted form Fred, and the pet forms Freddi and Freddie. A form of Freda used in other languages is the German Friede.

Freda is rare as a baby name for girls. In 1900, 0.101% of baby girls were named Freda. Its ranking then was #171. The baby name has since suffered a substantial fall in popularity, and is now used on an infrequent scale. In 2018, out of the group of girl names directly related to Freda, Frida was the most popular. 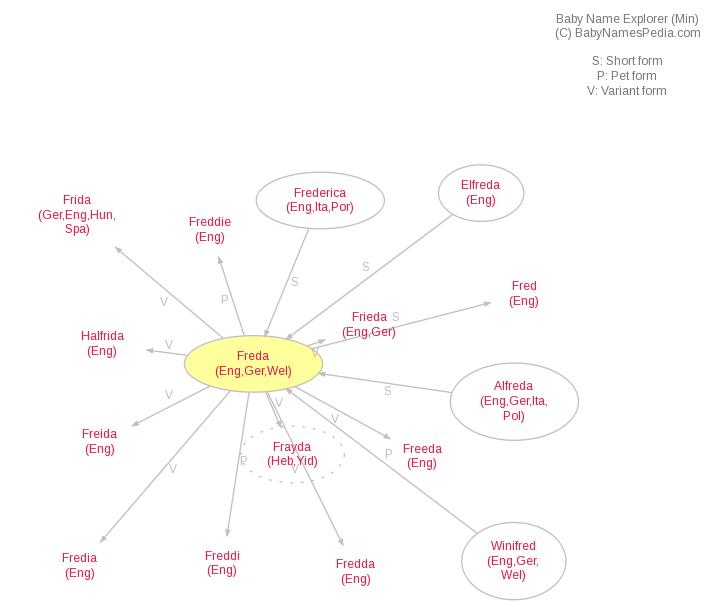