What does Freya mean?

[ 2 syll. fre-ya, fr-eya ] The baby girl name Freya is pronounced as FREY-ah- or FR-IYYaa †. Freya is used chiefly in English, German, and Scandinavian, and it is derived from Old Norse origins. It is from the element 'frowe' which is of the meaning mistress, lady. Frea (Old Norse) and Freyja (Old Norse) are original forms of the name. The name was borne in Norse mythology by the goddess of love, beauty, fertility, witchcraft, and death; she was also the wife of Odin. The name of the day Friday is derived from her name. The name Freya has been used occasionally by English speakers from the end of the 19th century, traditionally in Shetland and Scotland.

Freya has 12 variants that are used in English and other languages. English variants include Fraya, Frea, Freyah, Freyde, and Freyja (also used in Scandinavian).

Freya is popular as a baby name for girls, and it is also regarded as trendy. The name's popularity has been growing since the 2010s; before that, it was of irregular use only. Its usage peaked modestly in 2018 with 0.067% of baby girls being named Freya. Its ranking then was #266. Among all girl names in its group, Freya was the most popular in 2018. 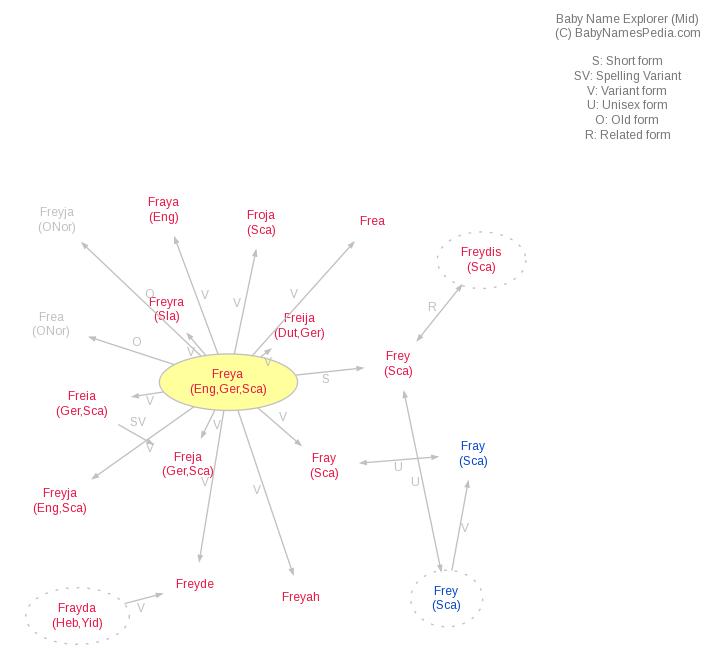