What does Fulgencio mean?

[ 3 syll. ful-gen-cio, fu-lgenc-io ] The baby boy name Fulgencio is pronounced in Spanish as FuwL-HHEHN-THYow or in Spanish-Latin American as FuwL-HHEHN-SYow †. Fulgencio is of Latin origin and it is predominantly used in the Spanish language. It is derived from the element fulgens which means 'shining'. Fulgentius (Latin) is an original form of Fulgencio. Saint Fulgencio was a 7th-century Spanish saint, while another Saint Fulgenzio was a 6th-century bishop of Ruspe.

A variant of Fulgencio is Fulgenzio (Italian).

Fulgencio is an unusual baby name for boys. It is not listed in the top 1000 names. 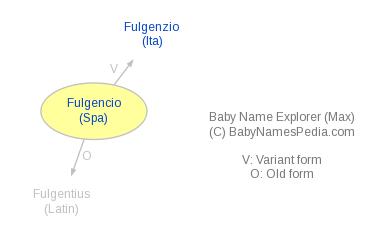