What does Fumiyo mean?

[ 3 syll. fu-mi-yo, fum-iyo ] The baby girl name Fumiyo is pronounced as FUW-Miy-Yow †. Fumiyo is of Japanese origin and it is also used largely in the Japanese language. The name means 'well-read generation'.

Fumiyo is irregularly used as a baby girl name. It is listed outside of the top 1000. 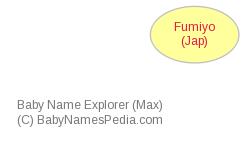