What does Gail mean?

[ 1 syll. gai(l), ga-il ] The baby boy name Gail is also used as a girl name, with the latter form being much more common. Its pronunciation is Gey-L †. Gail is used predominantly in the English language, and it is derived from Middle English and Old Greek origins.

Gail is a variant spelling of the name Gale (English).

Gail is also a variant of the name Galen (English).

Gail is a rare baby name for boys. At the peak of its usage in 1936, 0.021% of baby boys were given the name Gail. Its ranking then was #366. The baby name has since suffered a steep fall in popularity, and is currently of very modest use. Out of all boy names in its group, Gail was nonetheless the most regularly used in 2018. There were times from 1901 to 1928 when more boys than girls were named Gail, but currently it is more often than not a girl name. In 1962, girls named Gail outnumbered boys by 70 times. 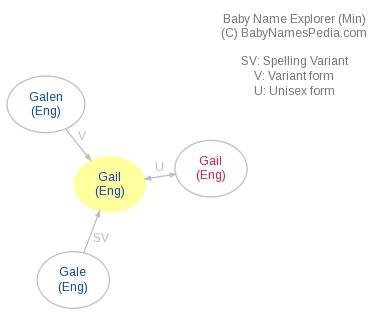