What does Galen mean?

[ 2 syll. ga-len, gal-en ] The baby boy name Galen is pronounced as GEY-LehN †. Galen is an English name of Old Greek origin. It is derived from the element 'galene' meaning calm. Galenus (Latin) is an original form of Galen. The name was borne by the 2nd century Galen of Pergamum, a prominent Greek physician whose theories dominated Western medicine for over a millennium. The name Galina (German, Russian, and Slavic) is the female form of Galen.

Galen is a widely used name; it has 24 variants that are used in English and other languages. Variants used in English include Gaelen, Gaelin, Gaelon, Gaelyn, Gail, Gailan, Gailen, Gailin, Gaillen, Gailon, Galan, Galin, Galon, Galyn, Gay, Gaylan, Gayle, Gaylen, Gaylin, Gaylinn, and Gaylon. The short form Gale, and the variant spelling Gaelan are other English forms. A variant of Galen in other languages is Galeno (Italian and Spanish).

Galen is unusual as a baby name for boys. Its usage peaked modestly in 1949 with 0.024% of baby boys being given the name Galen. It ranked at #330 then. The baby name has since experienced a marked fall in popularity, and is today of very light use. Among all boy names in its group, Galen was nonetheless the most popular in 2018. 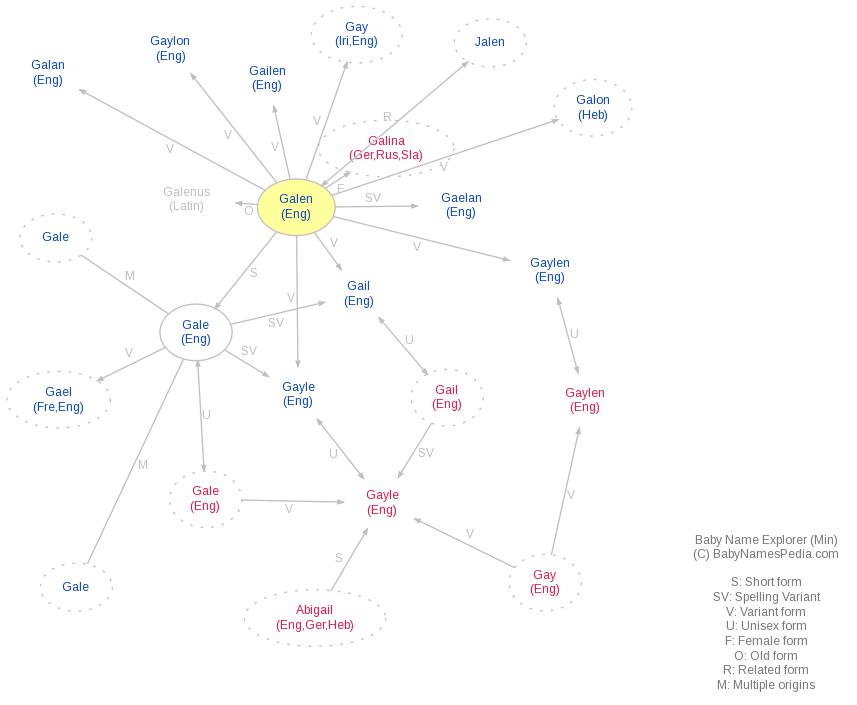