What does Gareth mean?

[ 2 syll. ga-ret(h), gar-e-th ] The baby boy name Gareth is pronounced as GAAR-eh-TH or GEHR-eh-TH †. Gareth is largely used in the English and Welsh languages. It is derived from Welsh origins. The name means gentle. The name evolved as an altered form of Geraint, or else from other names such as Garth, Gary and Gerard. It was first known as the name of the nephew of King Arthur in Malory's Morte D?Arthur (1485). English speakers adopted the name in the 16th century. Today, the name still retains a strong Welsh flavor.

Gareth is a variant transcription of the name Garrett (English and Irish).

Gareth has 18 variant transcriptions that are used in English and other languages. Variation transcriptions of Gareth used in English include Garath, Gare, Garif, Gariff, Garrath, Garrith, Garryth, Garyth, Geraint, Gerens, Geronte, and Jareth. Other English forms include the short forms Gar and Garth (used in Scandinavian as well), the diminutive Gary, and the variant spellings Garith and Garreth. A variant transcription of the name in other languages is Garthay (Irish).

Gareth is rare as a baby boy name. It is not listed in the top 1000. In 2018, within the family of boy names directly linked to Gareth, Garrett was the most regularly used. 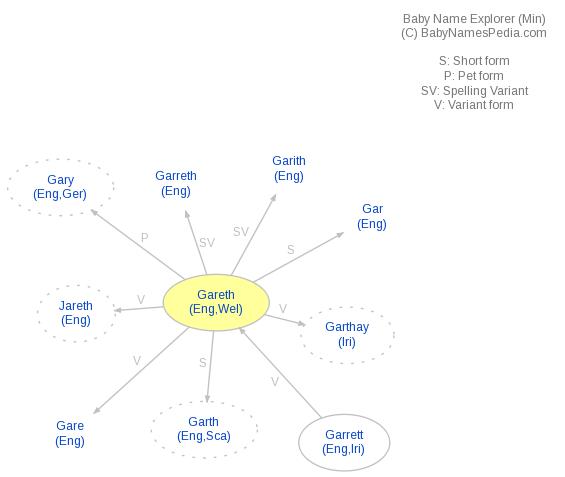