What does Garnet mean?

[ 2 syll. gar-net, ga-rn-et ] The baby girl name Garnet is also used, though less frequently, as a boy name. It is pronounced GAARNihT †.

Garnet is of English origin and it is also used mainly in English. It is from garnet ; gernet meaning 'dark red'. The first name is from the name of the garnet, a dark-red gemstone; the jewel name is itself derived from the Middle English element gernet. The given name was used moderately in the 19th century amidst an enthusiasm for jewel names. See Garnet for more information.

Another form of the name is the English spelling variant Garnett.

Garnet is of Old French origin. Here, it means 'one who makes hinges; one who sells pomegranates'. It is derived from carne which means 'hinges' ; pome grenate 'pomegranate'. It represents the transferred use of the job title and the surname as a given name.

Garnet is an unusual baby girl name. Its usage peaked in 1911 with 0.026% of baby girls being named Garnet. It had a ranking of #376 then. The baby name has steeply slipped in popularity since then, and is currently used only on a very modest scale. Among all girl names in its family, Garnet was nevertheless the most popular in 2018.

Baby names that sound like Garnet include Garnete, Garnett, Garnette, and Grant. 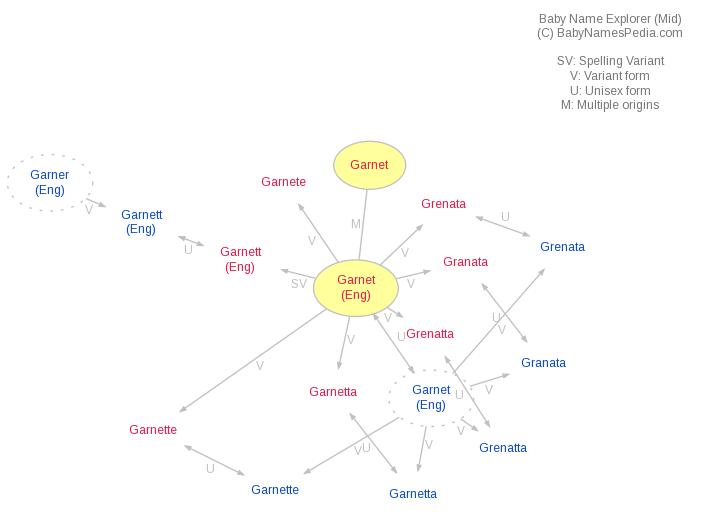