What does Garret mean?

[ 2 syll. gar-ret, ga-rr-et ] The baby boy name Garret is pronounced as GEHR-RihT †. Garret is used predominantly in the English and Irish languages, and it is derived from Irish and Germanic origins. The first name is derived from the Irish and English surname, which is itself from the given name Gerald or Gerard. As a first name, Garret was first adopted by English speakers in the 17th century. It has been especially popular in Ireland where it is often used as an Anglicization of Gearóid.

Garret is a variation (English) of the name Garrett (English and Irish).

Garret is also a variation (English) of the name Gerard (English, French, and Dutch).

Garret is a widely used name; it has 29 variations that are used in English and other languages. Variations used in English include Ganen, Ganin, Gannen, Gannin, Ganon, Garrard, Garreth, Garretson, Garrison, Garrit, Garrith, Garrot, Garrott, Garyth, Gerard, Gerity, Gerrit, Gerritt, Jarod, Jarrett, Jarrot, and Jarrott. Other English forms include the pet forms Garry and Gary, and the variant spellings Garet, Garett, Garrett (used in Irish too), and Garritt. A variation of Garret in other languages is Gearoid (Irish).

The origin and meaning of Garret is inherited by all variant forms.

Garret is unusual as a baby name for boys. Its usage peaked in 2000 with 0.028% of baby boys being given the name Garret. Its ranking then was #420. The baby name has since experienced a marked fall in popularity, and is currently of very modest use. Among the group of boy names directly linked to Garret, Garrett was the most commonly used in 2018. 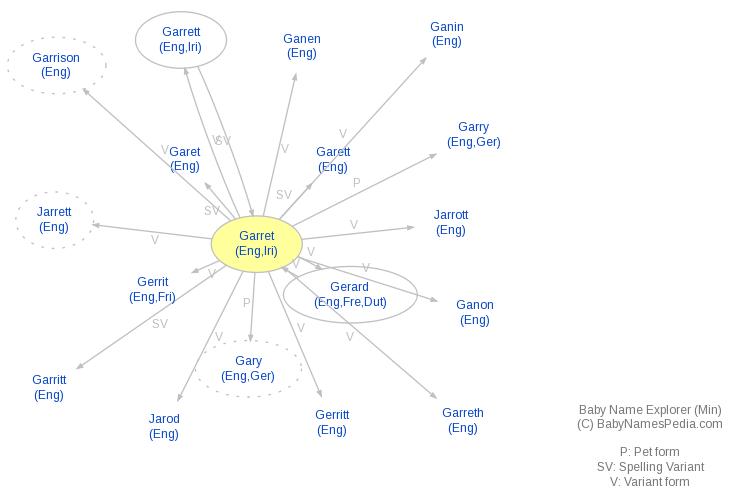