What does Garrison mean?

[ 3 syll. gar-ri-son, ga-rris-on ] The baby boy name Garrison is pronounced GEHR-Rih-SahN †. Garrison is of Irish and Old English origin, and it is predominantly used in the English language. From Old English roots, its meaning is 'from Garriston; son of Garret, son of Gary'. The first name is derived from the surname, itself possibly from a place name from Garriston in North Yorkshire, or else originally bestowed for a son of someone named Garret or Gary. It was popularized in the USA by the fame of the US anti-slavery campaigner William Lloyd Garrison (1805-1879).

Garrison is also a variant form of the English and Irish Garrett in the English language.

Garrison is a rare baby name for boys. At the modest peak of its usage in 1999, 0.017% of baby boys were given the name Garrison. It ranked at #566 then. The baby name has since steeply fallen in popularity, and is used only on a very light scale today. In 2018, out of the group of boy names directly linked to Garrison, Garrett was the most widely used. 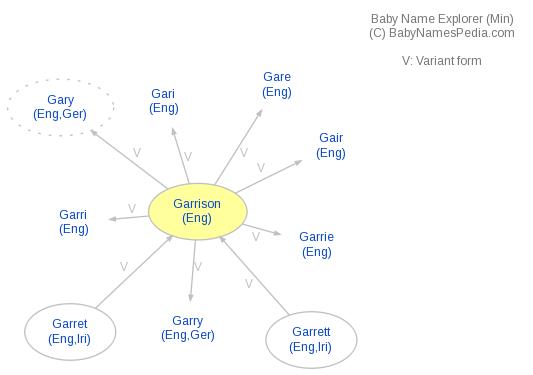