What does Gary mean?

[ 2 syll. ga-ry, gar-y ] The baby boy name Gary is pronounced as GAARiy- or GEHR-iy- †. Gary is used predominantly in the English and German languages, and it is derived from Welsh, Irish, Old English, and Germanic origins. Old English origin: It is from the elements 'gar' meaning spear ; 'ger' spear. The first name is derived from the English surname, which is itself of Norman French origin and from various names with the Germanic 'gar' as the first element. It could also be a pet form of the name Gareth. The name was borne by the US industrialist industrialist Elbert Henry Gary (1846-1927), after whom the steel town of Gary, Indiana was named. The name of the town was in turn adopted by the US actor Gary Cooper (Frank James Cooper, 1901-1961), whose fame boosted the popularity of the name. The name was later also popularized by the cricketer Gary Sobers (Garfield Sobers, 1936-), widely regarded as the greatest all-rounder in history, and the English glam rock star Gary Glitter (Paul Gadd, 1944-).

Gary is a pet form (English) of the name Gareth (English and Welsh).

Gary is also a pet form of the name Garret (English and Irish).

Gary is also a variant of the name Garrison (English).

Gary is also a pet form (English) of the name Gerald (English and German).

The name Garyn is the female version of Gary.

Gary has 16 variants that are used in English and other languages. Variants used in English include Gar, Garcea, Gare, Garea, Garee, Gari, Garie, Garree, Garrey, and Garri. Other English forms include the pet forms Gaz and Gazza, and the variant spellings Garey, Garrie, and Garry (used in German as well). A variant of Gary in other languages is Kali (Hawaiian).

Gary is a classic favorite. Today it is still fairly popular as a baby name for boys, though to a lesser extent than it was in the past. The name's popularity rose from the 1900s up to the 1950s. Its usage peaked in 1951 with 1.996% of baby boys being given the name Gary. Its ranking then was #10. The baby name has since substantially fallen in popularity. In 2018, its usage was only 0.019% and its ranking #674, but it was nonetheless the most popular among all boy names in its group. In 2018, Gary was used 52% more than the subsequent ranked name, Gerald. The name Gary has predominantly been a baby boy name, though it has also been given to girls in the past century. In 1947, baby boys named Gary outnumbered girls by 324 times. 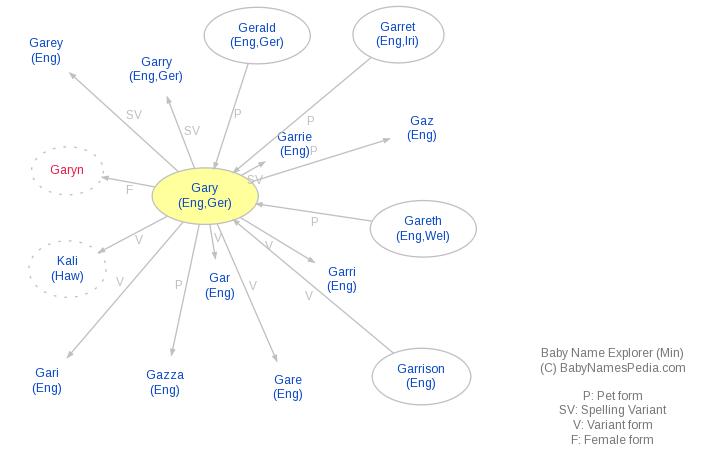