What does Gay mean?

[ 1 syll. gay, ga-y ] The baby boy name Gay is also used as a girl name, and more often so. Its pronunciation is Gey- †. Gay is used predominantly in the Irish and English languages, and its origin is Hebrew, Old Greek, English, and Old French. English origin, English use: The name was originally chosen for its well-omened meaning 'cheerful' or 'lively', but it dropped out of use from the mid-20th century, after the word 'gay' became the slang for 'homosexual'.

In addition, Gay is a variant (Irish) of the name Gabriel (Dutch, English, French, German, Portuguese, and Spanish).

Gay is also a variant of the name Galen (English).

Gay is also a short form of the name Gaylord (English).

Forms of Gay include the variant spellings Gae (English) and Gaye (English).

Gay is rare as a baby name for boys. At the peak of its usage in 1941, 0.003% of baby boys were given the name Gay. Its ranking then was #996. The baby name has since fallen in popularity, and is currently of very modest use. Out of the group of boy names directly linked to Gay, Gabriel was the most popular in 2018. Gay has in the past century been predominantly given to girls. In 1941, Gay as a girl name outnumbered its use as a boy name by 9 times. 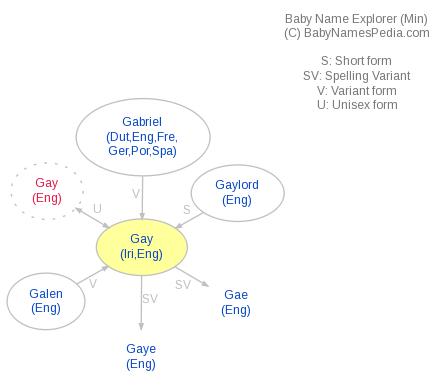