What does Gemma mean?

[ 2 syll. gem-ma, ge-mma ] The baby girl name Gemma is pronounced in English as JHEHM-ah †. Gemma is largely used in English, German, and Italian. Its origin is Italian. It is derived literally from the word 'gemma' which is of the meaning precious stone. The name has long been popular in Italy, and it was introduced into English speakers probably via the influence of Emma. Roman Catholics sometimes bestow the name in honor of Saint Gemma Galgani (1878-1903), the patron saint of students.

The contracted form Gem (English), the diminutive Gemy (English), and the spelling variants Gema (Spanish) and Jemma (Armenian and English) are other forms of the name.

Gemma is a popular baby girl name, and it is also regarded as trendy. The name's popularity has been growing since the 2000s; before that, it was of irregular use only. Its usage peaked modestly in 2018 with 0.074% of baby girls being named Gemma. It had a ranking of #229 then. Among all girl names in its family, Gemma was the most popular in 2018. Gemma was twice as popular as the subsequent ranked name, Jemma, in that year. 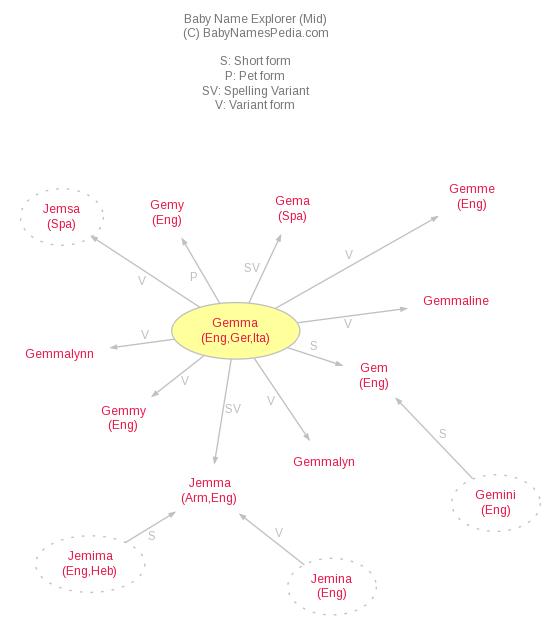