What does Gena mean?

[ 2 syll. ge-na, gen-a ] The baby girl name Gena is pronounced JH-IYNaa or Z-eh-NAA †. Gena has its origins in the Germanic, Celtic, and Native American languages. It is used largely in English and French.

Gena is a derivative of the English Geneva.

Gena is also a derivative (English) of the English, French, and German Genevieve.

Gena is also a spelling variant (English and French) of the Italian, English, Scandinavian, Russian, Spanish, and German Gina.

Gena is also a derivative of the English Magena.

Gena is rare as a baby girl name. At the peak of its usage in 1968, 0.029% of baby girls were named Gena. It was #419 in rank then. The baby name has substantially slipped in popularity since then, and is currently used only on a very modest scale. In 2018, out of the family of girl names directly related to Gena, Genevieve was the most frequently used. 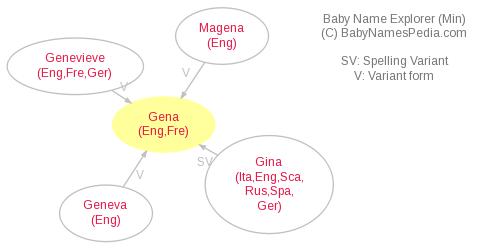