What does Geoffrey mean?

[ 2 syll. geo-(f)frey, ge-offr-ey ] The baby boy name Geoffrey is pronounced as JHEHFRiy- †. Geoffrey is used predominantly in English and German, and it is derived from Germanic origins. Geoffrey is of the meaning peaceful ruler. It is derived from the elements 'gawja' which means region, area ; 'walah' stranger ; 'fridu' peace, protection, safety. Gaufrid (Germanic) is an original form of the name. The name is of disputed origin; it could be also have developed as a form of Godfrey. The name was introduced by the Normans to England in the 11th century. The name was used by various counts, including Geoffrey Plantagenet (1113-1151), Count of Anjou, who was the father of Henry II of England. In the late Middle Ages, the name was known from the English poet and philosopher Geoffrey Chaucer (1340-1400) who wrote The Canterbury Tales, and the Welsh chronicler Geoffrey of Monmouth (Gruffudd ap Arthur) who was one of the leading figures in the development of British history and the tales of King Arthur.

Geoffrey is a variation of the name Jeffrey (English).

Geoffrey is unusual as a baby name for boys. Its usage peaked modestly in 1975 with 0.086% of baby boys being named Geoffrey. Its ranking then was #167. The baby name has since experienced a substantial loss in popularity, and is currently of irregular use. In 2018, among the group of boy names directly related to Geoffrey, Jeffrey was the most popular. 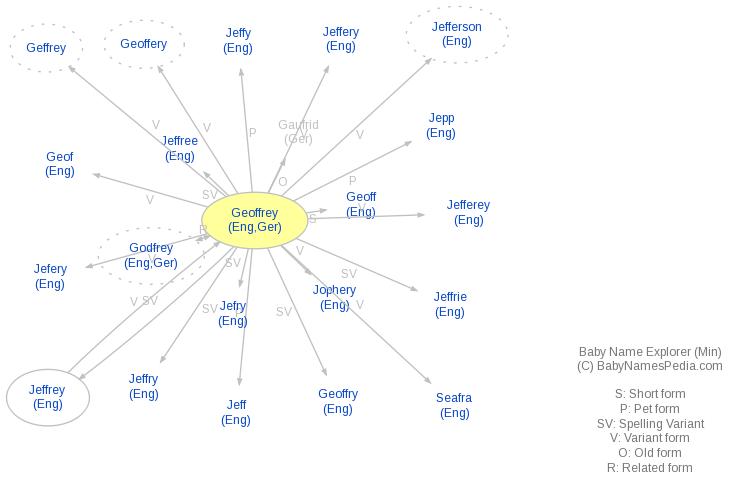