What does George mean?

[ 1 syll. geo-(r)ge, ge-o-rge ] The baby boy name George is pronounced as JHOWRJH (English) †. George is used predominantly in the English language and its origin is Old Greek. The name's meaning is farmer, earthworker. Georgius (Latin) and Georgos (Old Greek) are old forms of George. The Latin Georgius is derived from the Old Greek Georgios, which is of the element 'georgos'; the element itself is a compound of 'ge' and 'ergo'. The name was borne by several early saints, including Saint George, who was immortalised in the tale of his slaying a dragon, and is one of the Fourteen Holy Helpers. He was regarded as the patron saint of England since the 14th century, but in spite of this, the name was not popular with English speakers in the medieval period. The name became popular after the accession of the Hanoverian King George I in 1714. Subsequently five other English monarchs bore the name, further boosting its popularity and cementing its status as a royal name. The name Georgia (English) is the female version of George.

What are the Variant Forms of George?

George is a classic favorite. Today it is still a popular baby name for boys, though to a lesser extent than it was before, and it is also considered trendy. In 1900, 3.330% of baby boys were given the name George. It ranked at #4 then. The baby name has since steeply fallen in popularity. In 2018, its usage was 0.159% and its ranking #127, appearing with somewhat increasing regularity in the recent decade. Out of all boy names in its group, George was the most popular. In 2018, George was twice as popular as the next most popular name, Jorge. The name George has been mostly given to baby boys, though it has also been used as a girl name in the past century. In 1955, the name George was given to 164 times as many baby boys than girls. 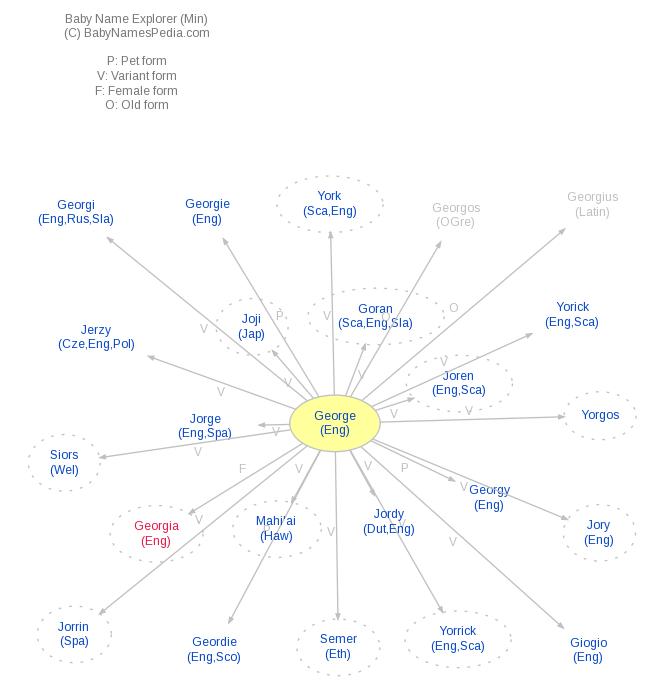